Quiz Answer Key and Fun Facts
1. What woman killed a man by nailing a tent peg through his head?

Judges 4:18-21: Sisera was in hiding and went to Jael's tent. She invited him in and places a covering over his head. He asked for water, she gave him curdled milk, and covered him up so he could sleep. Then she killed him. Deborah and Barak mentioned it in their victory song.
2. How were the people of Gennesaret healed?

Matthew 14:36 They were healed by faith, touching Jesus' garment.
3. Which of these was not a son of Noah?

Remember the saying 'old as Methuselah'? He was Noah's Granddad.
4. How many years did Methuselah live?

He was born in Bethlehem, His first recorded miracle (water into wine) was at Cana, and He was crucified outside of Jerusalem.
6. Which is not listed as a Fruit of the Spirit?

Wisdom is a Spiritual Gift found in 1 Corinthians 12:8. The Fruits of the Spirit are found in Galatians 5:22-23 are: love, joy, peace, long-suffering, gentleness, goodness, faith, meekness, and temperance (self-control).
7. Which is not one of the four canonical Gospels?

8. Who is credited with writing the first five books of the Bible?

9. Where did God give Moses the Ten Commandments? 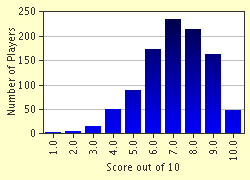 
Other Destinations
Explore Other Quizzes by Mary74