This quiz continues the legacy of my first two quizzes.

Quiz Answer Key and Fun Facts
1. On what mountain did Noah's Ark come to rest at after the flood?

Genesis 8:4 After the flood God put a rainbow in the sky to show that he would never destroy the earth with water again.
2. What was Belteshazzar's other name?

Daniel 1:7 Daniel's name was changed when Nebuchadnezzar took him to Babylon. Daniel was later thrown into a lions' den and survived (see question 10).
3. What was Andrew's profession before following Jesus?

Matthew 4:18 Andrew was the brother of Peter, who was also a fisherman who left his job to follow Jesus.
4. What city heard Jonah's preaching and turned to God?

Jonah 3:3-5 Jonah didn't go to Nineveh willingly though - he tried to get away by boat and got swallowed by a whale.
5. Which group of people did the giant Goliath come from?

Exodus 2:4-7: Miriam watched to see what happened to Moses after his mother put him in the river, and she saw Pharaoh's daughter take him. Her name is given in Exodus 15:20.
7. How many male siblings did Joseph have?

Genesis 35:22-26 His brothers sold him into slavery to get rid of him because their father, Jacob, loved him the most. Jacob had twelve sons, including Joseph, by his two wives and two concubines. The youngest, Benjamin, was Joseph's only full brother, and their mother died when he was born. Joseph also had a sister, Dinah.
8. How many outer doors were on Noah's Ark?

In Genesis 6:16, God told Noah how to build the ark, specifying "a door in the side of the ark". Then - after he built it and after he had got the animals on board - it rained for forty days and forty nights.
9. Whose clothes were made of camel hair?

Matthew 3:4 John the Baptist baptised Jesus in the Jordan river. He ate locusts and wild honey.
10. Which king put Daniel in the lions' den?

Daniel 6:25-27 Darius was a friend of Daniel's, but Daniel broke the law by praying and the punishment was to be thrown in the lions' den.
Source: Author hunt04 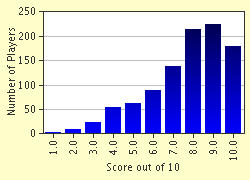