This is my fourth Bible quiz. I hope you enjoy it. All answers are taken out of the King James version.

Quiz Answer Key and Fun Facts
1. Which of the following men put a fleece out to see if dew would collect on it?

Judges 6:36-40 Gideon asked God for a sign and God gave Gideon answers three times through whether the fleece was wet or dry.
2. Which dead prophet's spirit did a woman bring forth for King Saul?

1st Samuel 28:3, 11-14 Samuel had died and King Saul was getting no answers from God so he went to a woman who brought forth the spirit of Samuel, who told King Saul that he and his sons would die soon.
3. What type of tree did Jesus make wither for not bearing fruit?

Matthew 21:19 The fig tree did not have figs on it at the time when Jesus passes by so he cursed it and it died. These events are also found in Mark 11:13-20.
4. In the parable told by Jesus, what was planted by the enemy with the wheat?

Revelation 8:10-11 The falling star Wormwood will affect one third of the water upon Earth making it undrinkable.
6. According to Psalm 23, what is the Lord?

Genesis 4:9 Cain said this after killing his brother and God asking him where his brother was. God knew that Abel had been slain, but instead of telling the truth Cain posed a question to God.
8. Which of the following is the shortest verse in the Bible?

John 11:35 The verse is simply two words: "Jesus wept." He did this shortly before bringing Lazarus back to life.
9. How many days did Jesus say it would take for him to raise the temple if it was destroyed?

John 2:19 Jesus said this after throwing the moneychangers out of the temple.
10. According to Matthew 22:32, what is God not a god of?

Matthew 22:32 God is the god of the living and not of the dead.
Source: Author hunt04 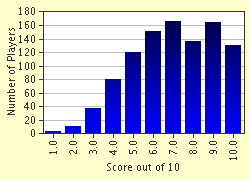