I am sitting looking at a foggy June day, bright sunshine for the past two days and rain the day before. I just have to do a quiz about the Great British summer.

Quiz Answer Key and Fun Facts
1. What causes fog or mist to form?

All of these factors are required to produce fog or mist.
When air is saturated with water (almost 100% humidity)and then cooled to the dew point (the temperature at which water vapour will condense to form water droplets) in the presence of condensation nuclei (small particles around which the water can coalesce), fog will occur.

The foggiest place in the world is considered to be the Grand Banks off of the coast of Newfoundland in Canada. This is where the warm waters of the Gulf Stream meet the cold waters of the Labrador Current creating the perfect conditions for fog to form.
2. You have woken up in the morning to see that the ground appears to be covered in a cloud. Can you tell me the difference between fog and mist?

By definition, fog reduces visibility to under 1km whereas mist is defined as reducing visibility to between 1km and 2km.
3. It is a bright, hot, sunny day similar to what the weather has been for the past three days. There is a lot of high level cloud in the sky, sometimes known as a 'mackerel sky'. What type of cloud is this most likely to be?

Altocumulus is a fairly high level cloud rising from about 6,500 feet to 20,000 feet (1,200 to 6,100 meters) above sea level. It is a thin cloud, which shows as lines in the sky. The lines appear to resemble the patterning on the back of a mackerel, hence the expression 'mackerel sky'.
Stratocumulus, a thicker cloud than altocumulus, has the appearance of large, dark, rounded masses. Stratocumulus are usually located below 8,000 ft(2,400m).
Pyrocumulus is created by extremely high temperatures from the Earth's surface and is usually caused by the heat from volcanoes or forest fires. The most identifiable Pyrocumulus cloud is the famous 'mushroom' cloud associated with nuclear explosions.
Cumulus Congestus is a cloud type that I have made up.
4. Surprise! surprise! the weather forecast is for thunderstorms this afternoon. Which type of cloud creates the most thunderstorms?

Cumulonimbus clouds can reach over 39000 feet (12000 meters). The high winds at this height flatten the tops of the clouds forming the classic 'anvil' shape associated with thunderstorms.
5. Thunder can be heard in the distance. My friend assures me that if I count the seconds between seeing the lightning and hearing the thunder, it is possible to calculate the distance of the storm. Is this true?

Start counting the seconds from when you see the flash of lightning until you hear the thunder. Then divide the result by 5 to calculate miles (or by dividing by 3 to calculate kilometres). This will allow you to calculate how far away the lightning is.
Because of the speed of light you will see a lightning strike one mile away almost immediately whilst it will take the sound wave of the thunder approximately 5 seconds to travel that distance.
It is uncommon for thunder to be heard when the storm is at more than 12 miles distance (20km)
6. If you are unfortunate enough to get caught outside in a thunderstorm, what is the best way of reducing your chances of being struck by lightning?


Answer: Crouched down with your head as low as possible without it touching the ground

Standing upright with your hands above your head is just plain silly and increases the chance of being struck.

Sheltering under a tree is dangerous should the tree be struck.

If possible get into a building or a car. Do not use electrical equipment and do NOT take a bath. In the event of lightning striking the house, the metal plumbing can earth/ground the electricity, possibly through your nice warm bath.
7. Wow! I have just seen an amazing phenomenon in the middle of a thunderstorm, a rapidly moving column of air was spiralling up into the sky. What type of thunderstorm produces the most tornadoes?

The four classifications of thunderstorms are Single cell, Multicell, Squall line and Supercell. The supercell is classified as the most dangerous due to the extreme weather that is associated with it. A supercell is defined as a thunderstorm with a deep rotating updraft - a mesocyclone.
8. We all know of Tornado Alley in the USA. Which country in Europe has the most reported tornadoes per square mile of land area?

Surprisingly, England appears to have the most reported tornadoes per square mile. Although the US has many more, and stronger, tornadoes, the greater area reduces the chance of your seeing one. Tornadoes in the UK are usually classified as F0-F1, using the Fujita scale with an occasion F2-F3 (Birmingham, July 2005 and London, December 2006).
9. The damage caused by tornadoes used to be measured using the 'Fujita (or Fujita-Pearson) Scale'. This was superseded in 2007 by the 'Enhanced Fujita Scale'. How many levels of intensity could be indicated using the original 'Fujita Scale'?

The 'Fujita (or Fujita-Pearson) Scale' for measuring the strength of a tornado was introduced in 1971 by Ted Fujita of the University of Chicago. The original scale was based on the Beaufort Scale, which was used to measure wind speed, with the Fujita Scale taking into account damage levels.

The 'Fujita-Pearson' Scale ranged from F0 ('A tornado with estimated wind speeds of between 40 - 72 mph that will cause little or no damage') to F6 ('An "Inconceivable Tornado" with wind speeds of between 319 to 379 mph'. It is believed that an F6 tornado will probably never be identified since the damage caused by an F5 tornado would be enough to obscure any further damage caused by an F6 tornado. An F5 tornado will completely destroy an American 'frame house' and carry cars and other vehicles for a hundred yards or more. In 2007, the Fujita Scale was replaced by the Enhanced Fujita (EF) Scale which 'standardised' reports of damage based on differences in housing construction, etc.
10. I have walked out into the garden and noticed that all of the glass in my greenhouse appears to have been broken. Which meteorological phenomenon associated with tornadic thunderstorms may have caused this?

Hailstones can range in size from under 0.4in (1cm) to 4in (10cm) or more. They are created when ice pellets, which form in storm clouds, are caught by a powerful up-draft and receive another coating of ice before they fall again. This process may be repeated many times which causes the ice ball (hailstone) to grow larger, until the weight of the hailstone is greater than the updraft can carry. At this point, the hail falls to Earth.
Source: Author DaveH1960

This quiz was reviewed by FunTrivia editor crisw before going online.
Any errors found in FunTrivia content are routinely corrected through our feedback system.
Most Recent Scores
Feb 01 2023 : Guest 80: 8/10
Dec 09 2022 : Eleanor18: 2/10 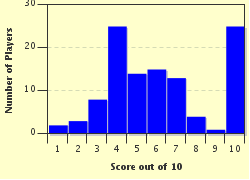 
Other Destinations
Explore Other Quizzes by DaveH1960