These are some of the most elite teams throughout baseball history. Let's see if you can identify them. :)

Quiz Answer Key and Fun Facts
1. At the top of most lists for greatest team ever might be this team from the 1920s. Nicknamed 'Murderers Row', this team had six future Hall of Fame greats on it. With two of the greatest players ever, Gehrig and Ruth, they combined for 109 home runs in the season. Which team was this?

Their Hall of Famers were Lou Gehrig, Tony Lazzeri, Earl Combs, Babe Ruth, Waite Hoyt, and Herb Pennock. Ruth's 60 home runs alone topped every other team total in the league. The Yankees led the league in batting average, walks, home runs, hits, and fewest strikeouts. They met the Pittsburgh Pirates in the World Series, outscored them 23-10, and took the series in four games.
2. This National League team was in a grooming process that would take them to three consecutive World Series in the first decade of the 20th century. Winning 116 games in a season, the team was led by two 20-game winners in Mordecai Brown and Jack Pfiester. Their bats led the league in 11 major categories, and their defense was just as great with the Tinker-to-Evers-to-Chance double play combination. Which team was this?

The Cubs went 116-36 in the 154-game season. They lost the 1906 World Series to the White Sox, but would win the next two against the Tigers.
3. With many future Hall of Famers on the roster, this tremendous team had the nickname "Big Red Machine" which was an adequate description. Their pitching staff was so well-balanced, that no pitcher won more than 15 games, and they had six pitchers win in double figures. Which team was this?

The Reds won the 1975 World Series over the Red Sox, then took another crown in 1976 against the Yankees, four games to none.
4. This 1960s team had the "M&M Boys" who combined for 115 home runs in the season, helping the team lead the league with 240. The team won 109 games in baseball's first 162-game season. The team also had a bat that won the MVP, and an arm that won the Cy Young Award. Which powerful team was this?

Baseball changed its 154-game season format to 162 games in 1961. The "M&M Boys" were Yankees Mickey Mantle and Roger Maris. Mantle hit 54 in the season with Maris breaking Babe Ruth's single season record with 61. Near season's end, Maris experienced some of what Hank Aaron would later experience, the closer he came to Ruth's record. Whitey Ford was their Cy Young winner with a record of 25-4.

The Yankees put down Frank Robinson and the Reds in the 1961 World Series, four games to one.
5. This 1950s National League team won the NL pennant by a big 13.5 games. They had seven players hit home runs in double figures, had the NL MVP winner, and had the arm of baseball's future first-ever Cy Young Award winner. All these combined into the franchise's first-ever World Series crown. Which team was this?

It took the Brooklyn franchise eight attempts before they would finally win the big one. The Dodgers defeated the Yankees in the series, four games to three. The Dodgers had some good bats in MVP Roy Campanella, Gil Hodges, Jackie Robinson, Duke Snider, and Carl Furillo.

Their pitching staff was led by Don Newcombe's 20-5 season, and he would win the first-ever Cy Young Award in the following season of 1956.
6. Having Tris Speaker and his bat, this was pretty much it for the power of this team. However, with one of the most powerful pitching staffs in baseball history, the team won 101 games in the season. Rube Foster, Ernie Shore, Babe Ruth, Dutch Leonard, and Joe Wood all won 15+ games in the season. Only one pitcher on the entire staff had a losing record. Who was this 1910s American League team?

This was the Babe's second Major League season, and with him hitting four home runs, fans were beginning to see this pitcher's bat power. The Red Sox won four World Series between 1912-1918, including their 1915 win over the Phillies. Ruth played his first season with the Yankees in 1920.
7. This 1920s team rostered future Hall of Fame greats including Lefty Grove, Al Simmons, Eddie Collins, Jimmie Foxx, and Mickey Cochrane. They outscored their opponents by almost 300 runs in the season. They had two 20-game winners in Grove and George Earnshaw. Which team was this that went to the first of their three consecutive World Series?

Under the guidance of Connie Mack, the Athletics were slowly groomed to regain the control they displayed in the 1910s, going to four World Series between 1910 and 1914. The 1929 squad had six .300 hitters along with Foxx and Simmons hitting 30+ home runs. The Athletics won the World Series against the Cubs, would defeat the Cardinals in 1930, then lost to those same Cardinals in 1931.
8. This team in the first decade of the 20th century would dominate the National League, and mainly because it picked up some all-star players from a defunct team. Some of these 'leftovers' were Honus Wagner, Deacon Phillippe, Tommy Leach, and Fred Clarke. Their presence won the team a NL pennant in their second season of coming aboard, then another NL pennant the following season. Phillippe, Jack Chesbro, and Jesse Tannehill all had 20-win seasons. Outfielder Ginger Beaumont also took the NL batting crown. Which team was this?

The 'all-stars' came from the defunct Louisville Colonels franchise that closed their doors in 1899. The new Pirates roster in 1900 finished second in the NL, then won three consecutive pennants from 1901-1903. The team would also go to the first-ever World Series in 1903, but lost to the Boston Americans.
9. This 1990s team had a season which they won their division by 22 games, winning more than 110 games in that season. The team had four .300 hitters, 10 players hit home runs in double figures, and scored the most runs in the season. Although having only one 20-game winner, they had six pitchers win in double figures. Their World Series would be no different as they skunked their opponents. Which team was this?

The 1998 season saw Boston finish 22 games back as the second place team. The Yankees' 20-game winner was David Cone with his 20-7 season. Tino Martinez led the bats with his 28 home runs. The Yankees' pitching staff ranked better than their batting roster. They won the World Series over the Padres in 1998.
10. This 1930s team was known as the "Gashouse Gang". The team was led by future Hall of Famers Joe Medwick, Frankie Frisch, and Dizzy Dean. Their biggest bat in the season was Ripper Collins who batted .333, hit 35 home runs, and had 200 hits. They won that World Series against the Tigers. Which tremendous team was this?

Dean went 30-7 along with his brother Paul going 19-11 in the season. Their pitching was equivalent to their bats, and both were ranked very high in the league. The Cardinals went to three World Series in the 1930s, and would find four in the 1940s.
Source: Author Nightmare 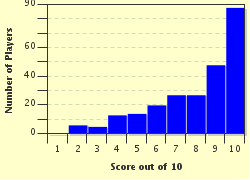