These slogans and jingles come from commercials that I remember on TV back in the 60's and 70's in the USA. I hope they bring back some memories for you.

Quiz Answer Key and Fun Facts
1. In a commercial for this game, one kid exclaims, "You knocked my block off!" Which game were they playing?

This game was recently referred to in a recent episode of Futurama. In the scene the robot character, Bender is aghast when one robot's head pops up.
2. In this commercial for sausages, a child calls out, "More ______ Sausages Mom!"

After hearing from many parents, the commercial was later changed to, "More Parks Sausages Mom... Please?"
3. Here's an old beer jingle, "They took what nature had to offer, hops, barley, corn and water clear. They brewed natural things into a natural beer, _______ natural beer."

It was the 70s and nature was in. The commercial included photos of fields of wheat, clear streams, etc.
4. In this commercial one of the kids jumps up and exclaims, "You sank my _______!"

I remember a version of this commercial where the kid was playing a man in a Navy uniform who responds by opening his mouth to shout and was drowned out by a foghorn of a boat.
5. "Once upon a time there was an engineer. Choo Choo Charlie was his name, we hear. He had an engine and he sure had fun." What product did he use to make his train run?

Charlie says, "Love my Good n' Plenty!" Charlie says, "Really rings my bell! Don't know any other candy that I love so well."
6. A ventriloquist's dummy sitting with his dog would sing that this company "makes the very best...". Then the dog (named Farfel) would sing "Cho-colate". What company were they singing about?

"N-E-S-T-L-E-S Nestle's makes the very best... Cho-colate!" Long before the Nestle's Bunny, I remember Farfel singing with his long snout. Danny O'Day and Farfel were the dummies for ventriloquist Jimmy Nelson. I always remembered it as Jerry Mahoney but that's because they were both made by the same figure maker, Frank Marshall.

These commercials have been recently seen in TVLand's Retromercials.
8. An older Italian woman pokes her head out of her apartment window and calls "Anthony" and then you see small boy who runs home because it's Wednesday and in this area of town Wednesday is _______ Day.

The famous Anthony commercial was first introduced in 1969.
9. "Hurry on down to _______ where the burgers are charcoal broiled."

Long before Burger King used a similar slogan, Hardee's had this little jingle. Wetson's was a New York area burger chain from the 1960s - 1970s era. Their icon was a clown named Sonny Wetson long before Ronald came to town.
10. "You deserve a break today, so get up and get away." Where is this jingle directing you to go?

This jingle was actually written by pop star, Barry Manilow.
11. We all know that NBC are the initials of a national US television network. But, at one time another well-known US company used the initials in their advertising and on their logo. What company was that?

Nabisco, originally known as the National Biscuit Company and used the initials NBC in their logo.
12. This commercial asked, "Would you offer a _______ to a lady?" What product are they talking about?

The Tiparillo was sort of a thin cigar with a plastic tip. This was at the beginning of Women's Lib.
13. In this famous commercial an injured football player is leaving the field and a young fan sees him struggling in the vacant hallway. He offers the player his drink. At first the player tries to shake the kid off, but then accepts the drink. What drink was it?

The football star was Mean Joe Greene and the drink was Coca-Cola. After gulping down the soda, Mean Joe calls out to the kid who was sadly walking away and tosses him his jersey. This commercial later became the basis for a movie.
14. Complete this list: "Baseball, Hot Dogs, Apple Pie and _______."

It was the widely used jingle of the early 70s.
Source: Author srm59 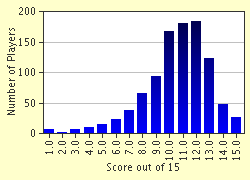 
Other Destinations
Explore Other Quizzes by srm59