Here is a quiz about some of those cute little icons of advertising that either annoy the heck out of you, or make you smile.

Quiz Answer Key and Fun Facts
1. You're in the kitchen of a fast food restaurant. A red and white oven mitt is talking (yes, talking) to the employees, giving them encouragement. Whose commercial was this?

The Oven Mitt campaign was created to demonstrate that Arby's used fresh roasted beef on their sandwiches. In one of the ads, Oven Mitt commented on how good one of the sandwiches smelled, prompting an employee to question how he could smell it without a nose. Oven Mitt freaked out, asking what happened to his nose.

When he was next shown sporting a nose, thanks to a pair of Groucho glasses, an employee questioned how the glasses stayed on without any ears, causing Oven Mitt to freak out again. The character was first introduced in 2003, and was voiced by actor Tom Arnold.
2. "Why yes, a duck to advertise the benefits of having our supplemental insurance sounds great." Which company used this approach?

The first commercial to feature the duck showed two men, sitting on a park bench by a lake, discussing that insurance that helps you pay your bills when you're injured. But the one talking about it couldn't remember the name of it. Enter the duck. He said, "Aflac", but the men kept talking.

He got out of the water, waddled up, and said again, "Aflac". The one man thought the duck wanted food and threw a piece of bread at him. Indignant, the duck kicked the bread back, hitting the man in the face. Yet again, the duck said, "Aflac", this time louder.

The guy still said he couldn't remember the name, and the duck shook his head in frustration. To end the commercial, the duck said "Aflac" to a hot dog vendor, who looked at the duck suspiciously and wondered if he had really heard anything.

The AFLAC duck made his first appearance in 2000, and has been in many of the company's commercials. The voice was provided by Gilbert Gottfried.
3. "OK, we need cute, cuddly and soft to sell our product." After they determined what they needed, what did Snuggle Fabric Softener decide to use as its mascot?

Snuggle the Bear, born in 1983, was beige and cuddly. In the ads, he was seen nuzzling blankets, sheets and other items in the laundry room. Sometimes he even threw laundry in the air, or rubbed two articles of laundry together to demonstrate how Snuggle eliminated static cling (who cleaned up the mess he made?).

He also enjoyed falling onto folded towels and giggling with children. When a new fragrance was introduced, such as Morning Fresh, Snuggle was shown running through a field and playing with a butterfly.
4. "Hey, why don't we just use a shape found on our logo to make a mascot?" The makers of 7-Up decided to do this. What did they call the mascot?

7-Up took the red spot between the '7' and the 'Up' and made a cool little mascot out of it. Spot had arms and legs, and wore sunglasses, white gloves and white shoes. In the TV commercials, Spot was usually jumping around having fun. During the 'Uncola' period, Spot could be seen removing the cola from a glass of soda (in very creative ways, such as with a vacuum), creating the Uncola, 7-Up. Spot even had his own video game called "Cool Spot".

The introduction to the game featured Spot surfing on a two-liter bottle of 7-Up to the tune of "Wipe Out".
5. Hurrying down the street, a little dog was on a mission. He passed a little female dog, who obviously thought he was coming to see her. Finally, he reached his destination, said "Psst", and spoke Spanish to a man who was eating something. What kind of restaurant chain food was the little dog after?

The Taco Bell chihuahua, played by a dog named Gidget, first appeared in 1997, and was best known for the phrase "Yo Quiero Taco Bell!". Other notable things the dog said were "Hasta la vista Whopper" and "A taco revolution...I am there!". My favorite ad would have to be the one Taco Bell made when they were promoting the movie remake of "Godzilla" in 1998.

The dog, who was holding a string in his mouth which was tied to a stick propping up a cardboard box, was calling "Here lizard lizard lizard" with the intention of catching Godzilla.

When he saw Godzilla, he dropped the string and said, "Uh-oh, I think I need a bigger box". Eventually, Taco Bell ended the cute dog ad campaign, and was no longer in need of Gidget's services. But, she did turn up in a Geico commercial later on.

The Taco Bell dog was at the Geico mascot auditions, and was just coming out when the Gecko was called. The Gecko saw the dog and said, "Well hello". Certain that his chances of getting the job were now slim to none, the dog said, "Oh great.

A talking Gecko".
6. "Eureka! We'll just take one red plain candy, and one yellow peanut candy, for starters, give 'em arms, legs and faces, and make 'em talk. They can sell themselves!" What kind of candy was this?

The main "spokescandies" were Red, the wisecracking one, and Yellow, the sweet, but not-so-bright peanut M&M. In the Christmas commercial, Red and Yellow came upon Santa, who saw them and gasped "They do exist!", after Red exclaimed, "He does exist!". Red and Santa both fainted, leaving Yellow standing there saying, "Uh, Santa?".

Other cute commercials included one with Patrick Warburton (he pointed out that the M&Ms were eating their own kind), one with Steven Weber (he told them he was glad to see them because he was out of M&Ms), and one where we saw a man getting frustrated with a vending machine (we didn't know why until we saw that Red was in there and was resisting the drop to the bottom).

My favorite, though, is the one where the man checking in to a hotel was asked if he'd like turndown service with a complimentary sweet on the pillow. Cut to the hotel room, and we saw Red lying on one of the pillows. He sighed, obviously bored, and asked if he could watch TV. The man, lying wide awake in bed with the lights on, said no.
7. "Let's see. We make a prescription medication for allergies. Hmmm.... How about we have a bee who's trying to pollinate flowers, but he can't because he's allergic to them. Brilliant!" Which medication decided to advertise their product this way?

We met our bee (voiced by Antonio Banderas) as he was greeting a flower. Suddenly he sneezed, and dejectedly told us that he was stuffed up and congested. A puff of Nasonex later, and he was a changed bee. After he found out about Nasonex, he passed the word around in subsequent commercials. We saw him at other people's houses, watching them sneeze and pointing out all the allergens.
8. A polar bear and his cute little cub were playing with a red ball. The cub accidentally made the ball go into the water nearby, and a seal popped up with it on his head, startling the cub. After a moment of uncertainty between the cub and the seal, the seal tossed the ball to the cub. For his help, the seal was rewarded with a frosty cold beverage. What beverage was the seal given?

Coca-Cola debuted the polar bears in the "Northern Lights" commercial in 1993 with its "Always Coca-Cola" campaign. A polar bear joined a bunch of others to watch the light show in the sky, and then they all enjoyed a refreshing Coke. The bears were shown in other ads partying with penguins, selecting a Christmas tree, playing with their cubs, and of course enjoying Coca-Cola.

In one spot, we even found out how they opened their Coke bottles (build a bear pyramid, send a cub to the top, grab the crescent moon, pass it down, use the point to open the bottle, put the moon back). For the winter Olympics in 1994, two spot were made showing the bears luging and ski-jumping.
9. You're watching a commercial featuring hot, fresh, cheesy pizza. All of a sudden, this little animated man comes on the screen and says "Pizza! Pizza!". Whose commercial are you watching?

Little Caesar wore an orange toga, a laurel wreath and sandals, and had two pizzas on his spear. The "Pizza! Pizza!" slogan came from Little Caesar's offering two of their pizzas, which were originally rectangular in shape, for the same price as one from their competitors.
10. "Our mattresses are so comfortable people won't have to count sheep to fall asleep anymore. Wait, that's it! We'll show how disgruntled the counting sheep are because we put them out of work." Which mattress company used this advertising gimmick?

The ads featured the sheep going to houses they had previously visited (and had contracts with), but finding that the occupants no longer needed them because they bought a Serta mattress. My favorite was the one entitled 'Penalty', where #8 tore off a mattress tag, landing all of the sheep in jail. Also cute was the one where the sheep were trying to get the humans to boycott a Serta holiday sale. Number 36 mentioned that he needed a job to pay for his kid's (#1/2) braces, which #1/2 then showed us by smiling.

The sheep in the ads were animated by Aardman Animations, the same studio which did the stop-motion for "Wallace and Gromit".
Source: Author Polaris101 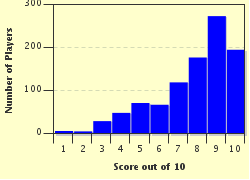