What product am I? Trivia Quiz

I will give you an advertising slogan and all you would have to do is decide what product used that slogan. These are United States products. Good luck and have fun!

This advertising slogan for Pepsi premiered in 1993 with Shaquille O'Neal. Pepsi was invented by Caleb Bradham in 1898 in his drug store. For a while, many called it "Brad's Drink", although later he named it "Pepsi-Cola".
2. "Once you pop, you just can't stop," is what potato chips' slogan? This product has been around since 1967.

Pringles were first introduced in 1967 and are produced by Procter and Gamble. It was once called Pringle's, and a year later its name changed to Pringles. It is known for its unique container and its unique shape.
3. "Double your pleasure, double your fun. It's the _________, __________ gum!" is the original advertising slogan for what kind of chewing gum since around the 1960s? The two blanks represent the same word and it is the product name.

Doublemint Gum was introduced in 1914 by the Wrigley Company. It has used twins in its ads since the early 1960s, playing on the word double in the slogan. It has had a similar packaging since it first premiered in 1914, with a green wrapping and an arrow with two arrows facing the opposite direction.
4. What paper towel's advertising slogan is "The quilted quicker-picker upper, __________!" The date for this product is unknown but it was advertised by Nancy Walker.

It is a product of Procter and Gamble. In the UK, the brand name Bounty was changed to Plenty in 2009. Bounty paper towels are made from virgin wood pulp, which means that it is not from recycled products.
5. Which fast food restaurant's slogan is "Have it your way," and opened in 1954?

JCPenney started in 1902 by James Cash Penney in the mining town of Kemmer, Wyoming. It was in a partnership with Guy Johnson and Thomas Callhan. This partnership has blossomed and JCPenney has become a predominant clothing store in the United States.
7. What candy's slogan is "Taste the Rainbow," and first appeared in 1981?

Skittles are a product of Mars, Incorporated and are almost identical in appearance to that of M & M's. They first appeared in 1981 with a commercial with Michael Jackson. They are fruit flavored and have an s inscribed on them. The original flavors are strawberry, lemon, grape, orange, and lime.
8. What beverage has the slogan "Got _________?" The blank is the product, and the product is used on cereal. This product is produced on farms.

Milk is a product that comes from female cows. Milk is used in many products, ranging from just plain, old milk to ice cream to cheese. Real milk isn't used in commercials because it looks blue on film. It is very versatile and is one of my favorite things to drink of all time.
9. What cereal's slogan is "Silly rabbit, _______ are for kids!?" The rabbit is white and is constantly trying to get at this cereal. This product is also a flavor of yogurt. The rabbit for this product was introduced in 1959.

Trix has been around since the 1950s and the original box included a stick figure. It changed in 1959 to the white rabbit that we have all come to love. Trix has always eluded this rabbit, and just once did he get a bite of his beloved cereal in 1991.
10. This one is not a product but a phrase that was used by the Looney Tunes character when the show was over. It is "Th-th-that's all folks!" Who is famous for saying this phrase at the end of the program since since the 1930s?

The series Porky Pig is in is called "Merrie Melodies" and he is a character of Warner Bros. Looney Tunes. Thank you for taking this quiz and I hoped that you have enjoyed it.
Source: Author firefly44 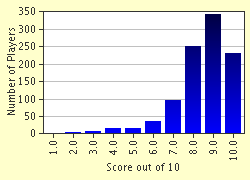 
Other Destinations
Explore Other Quizzes by firefly44