Over the years there have been thousands of shipwrecks, some of which have become famous. I will tell you of some well-known shipwrecks and you have to name the ship. Clues will be provided in most cases.

Quiz Answer Key and Fun Facts
1. My first question concerns a shipwreck which took place in 1545. England was under attack by a French invasion fleet when this Tudor warship sank by accident in calm waters. The wreck was rediscovered in 1971 and raised to the surface in 1982.

Contemporary accounts detail that the Mary Rose had engaged the French and had fired all her guns on one side of the ship. A sudden strong gust of wind caught the sails of the ship as she was already heeling over in a tight turn in order to bring the cannons on the other side of the ship to bear on the French.

Her open gun ports were forced into the water and the sea of course rushed in. Only around 35 of her 400+ crew survived. The wreck can now be seen in a purpose built museum in Portsmouth. About 40% of the ship survived immersion in the sea for over 400 years due to a covering of silt.
2. This troop-carrying ship foundered on an uncharted rock near Cape Town in South Africa in 1852. There were insufficient lifeboats to accommodate all on board, and the soldiers stood back to ensure that all women and children on board got into lifeboats safely. The call "Women and Children first" is named after this ship.

There were 643 souls on board the ship which sank in just 25 minutes. Only 193 survived. The Birkenhead Drill by which women and children are given priority to escape from life-threatening situations came about after Rudyard Kipling wrote a poem "Soldier an' Sailor too" which contained the line "To stand and be still to the Birken'ead Drill is a damn tough bullet to chew".
3. This Mississippi river boat exploded in 1865 near Memphis. It remains the greatest maritime disaster in U.S. history in terms of loss of life. The ship's name is the same as an eastern female leader.

The Sultana was a side-wheel paddle steamer. On that fateful day over 2400 people were on board despite the official capacity being only 376. People were crammed together on the upper decks. The top-heavy ship listed severely at each river bend, causing water in the four interconnected boilers to run freely from one to another. this is turn led to superheating of one boiler where the water level had dropped dangerously low but the fire below it was still burning.

When the ship's list reversed itself at the next bend, water ran back into the boiler and immediately turned to steam.

The sudden increase in pressure caused a massive explosion. The official death toll was about 1800 people.
4. This ship capsized while in dock in the Chicago river in 1915. The sun was rising nearby.

It was used as a passenger ship, and due to design flaws was known to be top heavy. Restrictions on the number of passengers it could carry were in place as a result. Following the sinking of the Titanic a new Federal act was passed in 1915 which required more lifeboats to be added to the ship which probably made it even more top heavy. On the morning of July 24, 1915, the ship had its full capacity of over 2500 passengers on board.

The ship started to list away from the dockside and within 15 minutes it rolled completely over onto its side. Nearly 850 passengers and crew died.
5. This appropriately named ship sank in stormy seas in the Baltic in 1994 while on route from the city of Tallinn, the capital of its country, to Stockholm in Sweden.

Tallinn is the capital of Estonia, a Baltic state. The ship had what is called a 'visor', where the upper part of the bow can be opened to reveal an access point for passengers and cargo. It seems that the ship was travelling at what was possibly an excessive speed for the weather conditions at the time.

The seas were quite high and a big bang was heard when a heavy wave hit the bow doors. Several further bangs were heard in the next 10 minutes or so after which the visor broke away leaving the ship open to the sea. Around 850 passengers and crew died when the ship sank.
6. This ocean liner sank in 1914, following a collision with another ship in the Saint Lawrence river.

The Empress of Ireland and a Norwegian coal carrier were aware of each other at a distance of several miles. Conditions were clear at that time but shortly after a very thick fog descended and both ships were blind. They were both sounding fog whistles when the collier crashed into the side of the Empress, severely damaging it.

It started taking on water and shortly thereafter developed a severe list making it impossible to launch the lifeboats. She sank about 14 minutes after the collision. 465 passengers and crew survived out of 1477 people on board at the time.
7. This German ship was evacuating German soldiers in the face of the advancing Red Army in January 1945 when it was torpedoed by a Russian submarine.

The Wilhelm Gustloff was being escorted by a torpedo boat but its submarine-sensing equipment was frozen solid and inoperable, which allowed the Russian submarine to get close. The loss of life was truly enormous. Approximately 9000 lives were lost including 5000 children. About 1250 people were rescued. Bismarck was a German battleship and the Admiral Graf Spee a heavy cruiser. Both had been sunk earlier in WW2.
8. This American battleship was sunk by enemy action in 1941. Almost 1200 sailors and Marines were killed.

The Arizona was at anchor in Pearl Harbour, Hawaii on 7th December 1941, when the American Pacific Fleet was attacked without warning by Japanese aircraft. One bomb penetrated the deck of the Arizona near the ammunition magazine and the ship exploded. Of the 1512 crew on board at the time, 1177 were killed. The wreck of the Arizona is now a memorial to the men killed that day.
9. In 1956, an Italian ocean liner heading for New York was off the coast of Nantucket when it was hit in the side by the Swedish cruise ship MS Stockholm in thick fog. Fifty two people died. What was its name?

The enquiry into the accident concluded that the Andrea Doria had not made proper use of radar or followed the proper rules when passing another ship. It should have turned to the right to avoid a possible collision but turned left. The Swedish ship had correctly turned right and the net effect was to put both ships on a collision course.

Other serious errors were made by the Andrea Doria. This was an important accident in that several new requirements were placed on shipping lines to stop accidents such as this happening again.
10. This ship sank in Lake Superior in 1975. It transported iron ore to the Great Lakes ports. Gordon Lightfoot had a hit song about it in 1976. What was its name?

The ship was en route to Detroit and joined up with another ship. The following day, they were both hit by near hurricane winds and waves reaching about 35 feet in height. The Edmund Fitzgerald suddenly sank without making any distress calls or signals. All 29 crew were lost.

Their bodies were never recovered. In 1976, Gordon Lightfoot had a hit song called "The Wreck of the Edmund Fitzgerald". The cause of the sinking remains unknown.
Source: Author Spontini 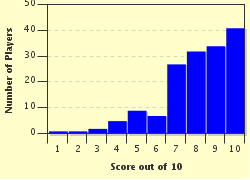