Some of the most fantastic sites in the world, but where are they located? In this quiz I will name several famous locales and you have to identify the country that houses them...good luck!

Quiz Answer Key and Fun Facts
1. Stonehenge, Hadrian's Wall, and Nelson's Column can all be found in which country?

The United Kingdom, and more specifically England, is where you will find these three sites. Stonehenge is a circle of monolithic rocks, probably created by the Celts. Nelson's Column can be found in Trafalgar Square, London. Hadrian's Wall was built by the ancient Romans to keep various Scottish tribes at bay. Walls never do their job well though...
2. Machu Picchu, Manu National Park, and Lake Titicaca can all be found in which country?

Peru is fortunate to have been the location of the ancient Incan empire. Machu Picchu was an Incan city located high up in the Andes. Manu and Lake Titicaca are both beautiful natural sites, Titicaca being the world's highest navigable large lake.
3. The Taj Mahal, the Towers of Silence, and Golconda can all be found in which country?

Everyone has heard of the Taj Mahal, the burial place of the Queen Mumtaz. Shah Jahan put way too much money into building her monument and his son Aurangzeb was none too pleased...he imprisoned his own father before he could build his own large scale monument!
4. Chichen-Itza, Cozumel, and Teotihuacan can all be found in which country?

Cozumel is a gorgeous island off the Caribbean coast of the Yucatan Peninsula. Chichen-Itza and Teotihuacan are both locations for the ancient civilizations of Mexico. Certainly worth a look!
5. The Valley of the Kings, Lake Nasser and the Pyramid of Khufu can all be found in which country?

If you haven't heard of the 'Pyramid of Khufu', perhaps the name 'Cheops' rings a bell? That's the Greek version of the name Khufu. Lake Nasser is a very large man-made lake on the Nile. The Valley of the Kings is where you'll find some of the burial places of the ancient Egyptian Pharaohs.
6. Ayers Rock (Uluru), the Kimberley, and Fraser Island can all be found in which country?

All of these are natural sites in Australia. Fraser Island is the world's largest sand island, and home to a ton of creepy-crawly beasties...I'm afraid to go there!
7. Lascaux Cave, Mont St. Michel, and the Arc de Triomphe can all be found in which country?

You can find the Arc in Paris, built by Napoleon himself (well, not really, he had architects and workers). Mont St. Michel is a small island off the northwest coast, while the Lascaux Cave contains some interesting little scribblings from our distant ancestors...go have a look!
8. Mogao Caves, Temple of Heaven, and Tai Shan can all be found in which country?

Tai Shan is one of the many sacred mountains in China. The Mogao Caves contain thousands of sacred Buddhist works from all the way back to Tang Dynasty times. The world's oldest printed text with a date on it came from these caves, the Diamond Sutra. The Temple of Heaven can be found in Beijing...my favorite place to go when there.
9. Jasper National Park, CN Tower, and the Bay of Fundy can all be found in which country?

At one time, the CN Tower was the world's tallest free standing building in the world. I have always admired it from pictures and television but have never had the chance to go. If I ever do go then I will naturally revise this quiz to acknowledge it. Let's hope I get the chance!
10. Pampas, Patagonia, and Mount Aconcagua can all be found in which country?

Mount Aconcagua is the tallest mountain in the western hemisphere. Argentina is a very large and very beautiful country, probably worth your while to take a visit! Happy traveling to all of you...enjoy the world, it's all we've got!
Source: Author thejazzkickazz 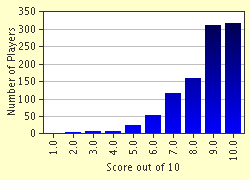