The process of codifying language families is a difficult one, often involving decades of research and yielding many missteps. This quiz will test your knowledge of language families both proven and hypothetical!

Share on Facebook
Share on Twitter
Share by E-Mail
Author
Sapir
Time
6 mins
Type
Multiple Choice
Quiz #
357,799
Updated
Jul 23 22
# Qns
10
Difficulty
Difficult
Avg Score
4 / 10
Plays
629
This quiz has 2 formats: you can play it as a or as shown below.
Scroll down to the bottom for the answer key.

Quiz Answer Key and Fun Facts
1. The hypothetical Altaic language macrofamily includes several extant Eurasian language families. Which of these is NOT considered part of Altaic?

Although Altaic is still a source of major controversy among linguists, those who are adherents of the Altaic hypothesis consider the Turkic, Tungusic, and Mongolic families to be three of Altaic's major branches. (Some linguists also consider Japanese and/or Korean to be Altaic languages.) The Chukotko-Kamchatkan family--itself somewhat controversial--is a small group spoken in Russia's Far East.
2. Spoken mostly on the western side of the France/Spain border, Basque has been attached to countless proposed language families, but none of these connections has stood on solid theoretical ground. One proposed linguistic connection to Basque does seem theoretically sound, however. To which ancient language does Basque seem to be genetically related?

Aquitainian seems to be a precursor language to Basque. Basque connections to the ancient Iberian language seem to be the result of lexical borrowing, rather than genetic relationship. Etruscan was spoken in what is now modern-day Italy, and the language remains largely undeciphered; the Illyrian languages are an ancient branch of Indo-European whose only surviving descendant is Albanian.
3. The Dravidian languages, spoken primarily in southern India and Sri Lanka, are part of which larger language family?


Answer: Dravidian is a stand-alone family

Despite attempts at linking them with all three of the other choices here (among others), no satisfactory connections have been made between the Dravidian languages and any other language families.
4. The Kalmuck language is spoken in Russia's Republic of Kalmykia, between the Volga and Don rivers. This is unusual because Kalmuck is a member of which geographically-distant language family?

About 166,000 people self-identify as Kalmuck, although the number of actual speakers of the language is unclear; another isolated enclave of Kalmuck speakers lives near Lake Issyk-Kyl in Kyrgyzstan (Bläsing 2003).
5. Linguist Hannu Hakola has proposed a language macro-family, based largely on the fact that all of the language families within it are agglutinative. What is the name of Hakola's proposed macro-family?

Duraljan is an acronym for Dravidian, Uralic, Altaic, Japanese, and Andean. Hakola proposed Duraljan in a 1997 paper that focused more on lexical similarities than on phonological correspondences.
6. Once considered to be an isolate language with two divergent dialects (Tundra and Kolyma), which of these is now considered to be a pair of separate languages, all that remain of a once-larger family?

By the turn of the 21st Century, only about 70 speakers remain of the Yukaghir languages (Krauss 1997). The Yukaghir languages have been included in several larger classification schemes, including "Uralic-Yukaghir," although these are all (at present) speculative at best.

Burushaski is spoken in far northern Pakistan; Nihali is found in western central India. Nivkh (or Gilyak) is spoken on Sakhalin Island and the lower Amur River. All three are isolates, although (as we have seen) that status is subject to change!
7. The Na-Dené family of North America was once considered a viable language family. Its status has been called into question in recent decades, however, with one language's family membership being a source of particular contention. Which language's membership in Na-Dené has been considered controversial?

Haida, spoken on Alaska's Prince of Wales Island and the Queen Charlotte Islands (Haida Gwaii) of British Columbia, is still considered a part of Na-Dené by some experts (Enrico 2004). Hupa is a member of the Athabaskan sub-family of Na-Dené; Eyak and Tlingit are more distantly related to the Athabaskan languages, chronologically speaking. In Na-Dené proper, Athabaskan-Eyak-Tlingit formed one branch of the family and Haida a separate branch.

Many proposals now consider Athabaskan-Eyak-Tlingit to be a self-contained family and Haida an isolate language with heavy Athabaskan influence (Campbell 1997).
8. Click consonants may be found in several language families in Africa; the !Xóő language has as many as five types of clicks (Miller, 2010). Which of these language families does NOT contain a click-consonant language?

Many of the click languages were once lumped into the "Khoisan" family, although the legitimacy of this family is considered questionable by many researchers of African languages (one can sense a theme here!). Many other click languages belong to the Bantu family (itself a part of the Niger-Congo family). The Cushitic language Dahalo contains clicks (Maddieson et al. 1993), although these may be the result of borrowing or relics from a previously-spoken language. The Tuu languages are a part of the former Khoisan family.

The Chadic languages are located in west-central Africa, and are part of the larger Afroasiatic languages.

At least one click language has been found far from Africa--Damin, a ceremonial register of the Australian language Lardil (Güldemann 2006).

However, clicks may have certain specific uses in many languages, even when not phonemic in those languages.
9. Although true numbers are difficult to assess and may vary from researcher to researcher, which language family is widely considered to have the largest number of distinct languages?

According to the Ethnologue, Sino-Tibetan, Indo-European, and Afroasiatic rank 4th, 5th, and 6th, respectively, in numbers of individual languages. Niger-Congo is listed as having 1532 languages; Austronesian is second with 1257. After those two, it's a large drop-off to #3, Trans-New Guinea (477 languages).
10. Guaraní is an official language of Paraguay, but is also unusual for being spoken by a vast majority of Paraguay's population; it is the only indigenous language of the Americas that is spoken by a majority of non-indigenous people (NYT, 3/12/12). To which language family does Guaraní belong?

This quiz was reviewed by FunTrivia editor looney_tunes before going online.
Any errors found in FunTrivia content are routinely corrected through our feedback system.
Most Recent Scores
Dec 23 2022 : masfon: 10/10
Dec 01 2022 : Andyboy2021: 10/10 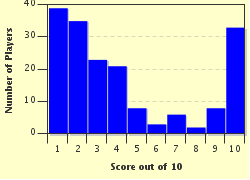 
Other Destinations
Explore Other Quizzes by Sapir