When the Man Comes Around Trivia Quiz

This quiz concerns the life and music of Johnny Cash.


Answer: I Walk The Line

"I Walk The Line" reached number 22 on the Billboard pop charts and 23 on The Cashbox pop chart in September 1956. This record has been inducted into the Rock and Roll Hall of Fame and the Grammy Hall of Fame.
4. In the 1950s Johnny cash had five records make Number one on the Billboard Country chart. "I Walk The Line", "There You Go", "Guess Things Happen That Way" and "Ballad Of A Teenage Queen" were four of his number ones. Which record was the fifth Number one of the 1950s for Johnny Cash?

"Don't Take Your Guns To Town" reached Number one in January 1959. "Big River" reached Number four, while "The Ways Of A Woman In Love" and "Give My Love To Rose" both reached the Number two position. All these titles made it on to both Billboard and Cashbox pop charts, but did not climb very high.
5. Johnny's biggest pop hit was written by a cartoonist.

"A Boy Named Sue" reached number two on the Billboard and Cashbox pop charts in 1969. The song was written by Shel Silverstein. Shel was a modern day renaissance man, a poet, songwriter, screenwriter, author of children's books, playwright and journalist. Many of his songs were recorded by Dr Hook and The Medicine Show Band. Many of his cartoons and articles featured in Playboy magazine.
6. Johnny Cash was part of "The Million Dollar Quartet" with three other artists. Jerry Lee Lewis, Elvis Presley and which other Sun recording artist?

Carl Perkins a long time friend of Johnny Cash. The so called "Million Dollar Quartet" was so named because a photograph of the four was used in a magazine with that caption. Subsequently an album of outtakes and an impromptu jam session at Sun Records in 1956 was released as the "Million Dollar Quartet". At that time Elvis had left Sun Records and signed with RCA Victor.
7. "Ring of Fire" his big worldwide, country and pop hit of 1963, was co-written by a person close to Johnny. Who was it?

June Carter was Johnny's wife, from 1968. She cowrote the song with Merle Kilgore. Kris, Willie and Carl, songwriters and performers in their own right, all worked with Johnny.
8. Roseanne Cash, Carlene Carter, Benny Carter and Tommy Cash are all related to Johnny Cash.

Roseanne Cash is Johnny's daughter from his first marriage to Vivien Libretto. Tommy Cash is his younger brother. Carlene Carter is his step-daughter, her parents are June Carter and Carl Smith.

Benny Carter is a Jazz Saxophonist/Trumpeter and bandleader of the 1940s, no relation to Johnny Cash.
9. Johnny had his own TV show in the late '60s, which was screened on the ABC network. What was this series called?

The show ran on ABC from 1969 to 1971, featuring such varied acts as Bob Dylan, Waylon Jennings, Derek and the Dominos and Louis Armstrong.
10. Johnny appeared from 1985 with three other country heroes as The Highwaymen. Along with Willie Nelson and Kris Kristofferson, which other Country music legend made up The Highwaymen?

Waylon Jennings, a multi award winning country artist and songwriter. Waylon Jennings famously gave up his seat to Ritchie Valens, on the ill-fated flight that killed Buddy Holly, J.P. Richardson (The Big Bopper) and Valens himself. Roy Orbison and Carl Perkins both started their recording careers at Sun Records. Glen Campbell had many pop and country hits.
Source: Author Desimac 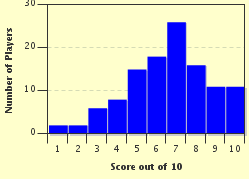 
Other Destinations
Explore Other Quizzes by Desimac