Here are a few questions about some of the more notable libraries and librarians in history, presented with concurrent events.

Quiz Answer Key and Fun Facts
1. In the seventh century BC the Hanging Gardens of Babylon were built. Nineveh, the capital of Assyria, became the largest city in the world. What is the name of the magnificent library established in Nineveh during this period?

The collection of tablets comprised many great works. It held materials from a broad spectrum of types literature, including the "Epic of Gilgamesh." Virtually anything that could be recorded was collected and preserved by King Ashurbanipal who was very well educated.
2. This library is believed to have been established in the early part of the third century BC. The Colossus of Rhodes was built. The Ptolemies led Egypt during this time. What is the name of the library?

Also known as the Royal Library of Alexandria, this library was the largest of its kind in the world at the time. There are varying accounts describing its destruction. Carl Sagan said this about the library of Alexandria, "History is full of people who out of fear, or ignorance, or lust for power have destroyed knowledge of immeasurable value, which truly belongs to us all. We must not let it happen again."
3. Constantius II, son of Constantine the Great, provided much of the impetus in the continuation of this library, along with a large staff of scribes and librarians. Which ancient library was it?

In one of the earliest examples of library collection preservation, Constantine the Great initiated the conversion of materials recorded on papyrus to the sturdier and more durable parchment. Nevertheless, fire destroyed the bulk of the collection.
4. It was during this decade that Johannes Gutenberg revolutionized printing in Europe, with his invention of printing by movable type. Pope Nicholas V began acquiring materials for this library in 1448. What is the name of this library?

The Vatican Library's first librarian created a catalog of the library's holdings in 1481. The library was formally established in 1475 under the name of, "Biblioteca Apostolica Vaticana." The fifteenth century was known as the "Age of Discovery."
5. Founded on April 24th, 1800, this library is listed by "The Guinness Book of World Records," as the "World's Largest Library." In which country is this library?

The Library of Congress is the largest library in the world, in terms of space and volume. It is the primary source of research requests by the United States Congress. The Library of Congress hosts a website as well as an online catalog of its holdings.
6. Giacomo Casanova was a prolific author and, in some circles, he is referred to as "the world's greatest lover." Is it true that he was also a librarian?

Even though it was many years after his heyday, Casanova spent the latter part of his life as a librarian for Count Waldstein of Bohemia. Jakub Mracek writes, "Casanova's job was to do some system in this huge library, but he did nothing. All the years in Duchcov, he only wrote his books and his correspondence."
7. It was one year prior to the 1896 Olympic Games. In which U.S. city, was one of the largest metropolitan public library founded?

The Boston Public Library became one of the first, if not the first library, of significant size to open its doors to the public. Any resident of the state of Massachusetts may borrow materials or conduct research at this library. This is inscribed on the wall of the main branch of the BPL, "The Commonwealth requires the education of the people as the safeguard of order and liberty."
8. This national library is located in the capital city of the country. It holds a vast Asian collection, as well as great multimedia collections on the country's history and culture. Which country's library is this?

Located in Canberra, Australia, this relatively new national library is the focal point for the preservation and gathering of Australia's culture. Many of the collections may be viewed online, including pictures, dance and music. "Pandora" is the name of the library's web archive.
9. During the 1870s, deadly famines struck Persia, China and India. However, in the U.S., it was the advent of the "Gilded Age." Who was the American librarian, responsible for the development of a method of library classification, based on a decimal system?

As library collections grew in size and scope, it became necessary to catalog and organize these collections in a systematic manner. In 1876, Melvil Dewey invented a method of library classification, known as the Dewey Decimal System or Dewey Decimal Classification. Dewey served as the head librarian for Columbia University for five years, and went on to become the director of the New York State Library until 1906.
10. The age of "The American Old West," was over during this decade. Founded in 1895, this prominent public library, renowned for its research and reference collections, is one of the largest in the United States. What is the name of this library? 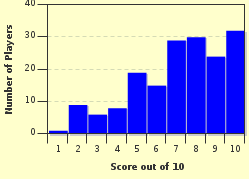 
Other Destinations
Explore Other Quizzes by christopherm