Sure, a lot of books are found on various electronic devices, but there is still a lot of fun to be found in your modern library!

Share on Facebook
Share on Twitter
Share by E-Mail
Author
lompocjoe
Time
6 mins
Type
Multiple Choice
Quiz #
349,401
Updated
Apr 13 22
# Qns
10
Difficulty
Tough
Avg Score
6 / 10
Plays
437
This quiz has 2 formats: you can play it as a or as shown below.
Scroll down to the bottom for the answer key.

Quiz Answer Key and Fun Facts
1. Criticism of 'pulp fiction' (books, not the movie) has been around for a long time. See if you can complete this disdainful comment made in the seventeenth century: "Some books, like the City of London, fare the better for being ________".

English satirist Tom Brown (1662-1704) always bemoaned the fact that his books were overlooked by the British public and felt that there were too many works being published solely for entertainment. Brown was often vicious and a bit smutty when penning his critiques of everyday society and was called "coarse and scurrilous" in the 1911 Encylopedia Britannica.

His snotty reference to the City of London fire refers to the disasterous blaze of 1666.
2. You've time-traveled to Beijing University Library in 1927 and are ready to check out a book. The librarian behind the counter looks familiar and you know you remember him from a picture in one of your 21st century history books. Who is he?

Mao was the Assistant Librarian to a very influential man, Li Dazhao, who would mentor his young worker in the doctrines of Karl Marx, starting him on the path that eventually led to his selection as Chairman of the Chinese Community Party.
3. The world's largest public lending library is located in what city?

Created by Thomas Carlyle in 1841, the million-plus books in the London Library are available to anyone willing to part with a small 'subscription' fee. In 2012, the adult fee was Ł445, there were no overdue fines, and patrons just might check out a book that had been handled by Charles Dickins or Sir Arthur Conan Doyle.
4. You've all heard of the Library at Alexandria, but Alexander the Great was inspired to build it after seeing the incredible library that King Ashurbanipal had built in the 7th century. Where was this remarkable storehouse of books made of clay, wood, and papyrus? (Hint: Allen Drury used the name of the city in one of his novels)

King Ashurbanipal was a true bookworm. He was also a bit of a tyrant and countries surrounding his Assyrian Empire would gladly send him copies of their books in order to keep him out of their backyards. In 612 B.C., a fire destroyed the library, but in 1845 British archaeologist Sir Austen Henry Layard discovered many books (partially baked clay tablets) including "The Epic of Gilgamesh", a literary classic from Mesopotamia.
5. Unfortunately, many people consider the theft of a library book to be a minor offence. They might have thought differently in medieval Europe. People fortunate enough to be able to borrow books were given this little ditty to remind them of their duty to return it: "Steal not this book my honest friend For fear the gallows should be your end. And when you die the Lord will say... (Complete the last line)


Answer: "And where's the book you stole away?"

You did not want to get on the bad side of medieval librarians since most of them were clergy who could call hellfire and brimstone on those who lost, misplaced, or damaged a book. Seriously though, if you follow Abbie Hoffman's sardonic 1970 request to "Steal This Book" consider that US public libraries have between $50,000 and $75,000 worth of books stolen every year!
6. In the 2011 film "J. Edgar", Leonardo DiCaprio (portraying future FBI chief J. Edgar Hoover) takes his lady friend, Helen Gandy, on an after-hours tour of the Library of Congress. He grandly tells her that the classification system used in the Library was partially his creation. Was he telling the truth?

Oh, pul-eeze, J. Edgar, give it a rest. Yes, you once worked at the Library of Congress in 1913, but you never created or improved on the Library of Congress Classification System that had been in use years (1897 to be exact) before you ever showed up. Your brief stay at the Library did give you inspiration to develop a classification system consisting of cards containing information on all of your enemies...real or imagined.
7. Books about how the Dewey Decimal System works might not send you into a paroyxsm of excitement, but just in case you want to curl up with something from the 025.4 section, which one of these titles is NOT a real book?

"Bob the Alien" was written by Martin Haake in 2010 and tells of a little green exterrestrial who wants to find a book on spiders. Josephine Carr wrote about spinster Alison Sheffield discovering passionate love in the stacks in her 2003 magnum opus, "The Dewey Decimal System of Love". Finally, the "Truman" book is a collection of library cartoons. No "Dewey? Phooey!" as of June 2012, but with the system under attack by many librarians, it might not be long before such a tome appears.
8. Presidents often make lofty statements about the importance of libraries, especially when they are tasked with coming up with a proclamation for National Library Week (yes, Virginia, there is such a thing...in April). What president said the following: "Nothing would do more extensive good at small expense than the establishment of a small, circulating library in every county, to consist of a few well-chosen books, to be lent to the people of the county, under such regulations as would secure their safe return in due time".

Considering that Thomas Jefferson is the 'father of the Library of Congress' and a famous bibliophile, it's not surprising that he made this quote in 1809.
Another president who believed in the value of libraries was John F. Kennedy who said in 1963 "The library is not only the custodian of our cultural heritage but the key to progress and the advancement of knowledge". Thank you, Mr. Presidents.
9. In the little town of Allegheny, Pennsylvania, a 14 year old boy avidly read the many books in the library of Col. James Anderson. The year was 1850 and Col. Anderson had made his collection available to the working boys of Allegheny. Who was the boy who would go on the become a millionaire and spend a great deal of his fortune on the construction of public libraries throughout the United States?

Born in Scotland in 1835, Carnegie would become a U.S. steel magnate, rivaling John D. Rockefeller in wealth. He never forget his early days in Allegheny and the kindness of Col. Anderson. In his 1920 autobiography, Carnegie wrote "It was from my own early experience that I decided there was no use to which money could be applied so productive of good to boys and girls who have good within them and ability and ambition to develop it, as the founding of a public library in a community which is willing to support it as a municipal institution".
10. The parking garage of the Kansas City (Missouri) Public Library is architecturally fascinating. Why?


Answer: The outside of the building looks like giant books on a shelf

The spines of several classic titles, including "Catch-22", "The Adventures of Huckleberry Finn", "Silent Spring", and "Charlotte's Web", have been recreated in a 9 by 25 foot rectangle on the garage's exterior wall. The total cost of the garage, plus a re-modeling of the library, cost more than $50 million and the parking structure has become a popular tourist attraction.
Source: Author lompocjoe

This quiz was reviewed by FunTrivia editor stedman before going online.
Any errors found in FunTrivia content are routinely corrected through our feedback system.
Most Recent Scores
Nov 12 2022 : bernie73: 5/10
Nov 07 2022 : Guest 172: 1/10 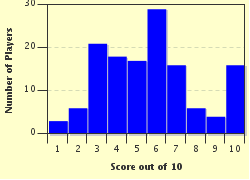