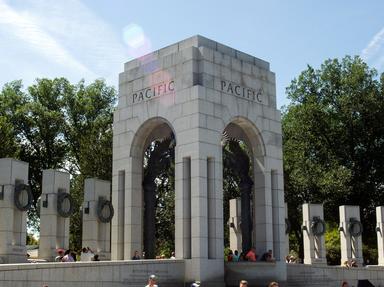 Play this hour's "Trivia About Pacific War" mixed quiz game
There are 78 Pacific War quizzes and 780 Pacific War trivia questions in this category. Free to play!

Quick Question
Most of the recruits in Castner's Cutthroats were native to Alaska. In addition to their familiarity with the area, what other attributes made them invaluable to the U. S. Army?
Sub-Categories With More Pacific War Quizzes:

USAAF Aircraft of the Pacific

10 questions
Average, 10 Qns, cwelch, Jun 12 13
A short quiz about some of the USAAF aircraft from the Pacific Theater in WWII.
Average
cwelch
2724 plays
6.

20 questions
Average, 20 Qns, mstanaway, Jan 22 15
Test your knowledge of the Solomon Islands campaign when two evenly matched opponents slugged it out for control of the waters around Guadalcanal in 1942-43.
Average
mstanaway
Jan 22 15
2172 plays
9.

What did you do in the War, Dad? 10 questions
Tough, 10 Qns, GroundsKeeper-Willy, Aug 03 18
My father, Frank, is a great bloke and played his part in World War 2. You need not know him to answer these questions, but you will need to know a bit about WWII Pacific war history.
Tough
GroundsKeeper-Willy
Aug 03 18
2664 plays
11.

10 questions
Average, 10 Qns, stuthehistoryguy, Apr 01 08
A quiz about Japanese atrocities following the fall of the Chinese Republic's capital, also known as the Rape of Nanking. Though I have used discretion in writing these questions, this topic is not for the squeamish.
Average
stuthehistoryguy

The Pacific War-Part I 20 questions
Difficult, 20 Qns, Sportcon, Aug 06 10
This quiz covers some of the major players and early events of the Pacific War. Lots more to follow. Have fun!
Difficult
Sportcon
2568 plays
13.

10 questions
Average, 10 Qns, bertho, Dec 07 09
The great island fortress, impregnable Singapore, the Gibraltar of Eastern Asia. This quiz looks at how Singapore fell to the Japanese, an event that perhaps triggered a rise in nationalism throughout the colonies, long after the last shot was fired.
Average
bertho
2082 plays
14.

10 questions
Average, 10 Qns, Christa_Smith, Nov 29 07
How much do you know about the internment of the Japanese Americans?
Average
Christa_Smith
1428 plays
15.

10 questions
Average, 10 Qns, beterave, Sep 17 13
US Marines in WWII often said this to one another. This quiz is about those young men who answered the call after Pearl Harbor.
Average
beterave
1002 plays
18.

Fighting a Long Lost Cause

'Life' in a Japanese POW Camp 10 questions
Difficult, 10 Qns, beterave, Dec 01 09
What was it like to be a prisoner of the Japanese? This quiz will answer some of those questions.
Difficult
beterave
663 plays
25.

Bataan - Beginning to End 20 questions
Difficult, 20 Qns, JennaV, May 17 06
The story of Bataan is amazing and I hope you all enjoy the quiz and possibly learn something you didn't know before.
Difficult
JennaV
1080 plays
26.

Japanese Atrocities in WWII 10 questions
Difficult, 10 Qns, beterave, Feb 27 11
Hi again, these are some well known and not so well known atrocities and war crimes committed by the Japanese during WWII.
Difficult
beterave
633 plays
27.

Japan and the Early War Years 10 questions
Tough, 10 Qns, csm101, Aug 16 07
A short but in depth quiz on the history of Japanese aggression in the first years of World War 2 and in the lead-up to the Pearl Harbor attack.
Tough
csm101
675 plays
29.