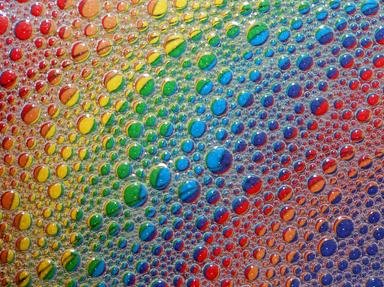 All My Colours Trivia Quiz

This quiz is a sequel to 'Code Red'. This time, it features TEN colours. I'll give you a list of items and you pick what colour they have in common.

Quiz Answer Key and Fun Facts
1. What colour do the kit worn by Chelsea FC, an English police box, and the backdrop of the flag of Wyoming have in common?

Chelsea FC - my stepfamily's football team, incidentally - are known as the 'Pensioners' and the 'Blues', and play in blue and white. They even had an FA Cup song called 'Blue is the Colour' released for the 1972 FA Cup final.

A police box was a defunct type of telephone box used both by the police and members of the public to contact the police, and was painted blue to distinguish it from ordinary telephone boxes. It had a direct line to a local police station, and contained additional equipment such as first aid kits and fire extinguishers. Fans of 'Doctor Who' might have noticed that this is the shape the Doctor's TARDIS takes.

The flag of the state of Wyoming consists of a white bison standing on a blue background, with a red line around it. The blue background represents the skies and mountains.
2. What colour do courtesy telephones in American airports, the kit worn by Sir Garfield Sobers in his playing days, and a snooker player called Jimmy have in common?

Courtesy telephones are used to relay messages to a specific person, and can be found in airports, as well as hotel lobbies, stations and other places frequented by travellers. In the US, they are usually white. If you've seen the film 'Airplane!', you'll have noticed the frequent appearance of these telephones.

Sir Garfield Sobers is a West Indian cricketer, with a reputation for being a great all-rounder, and white is the colour worn by cricket players.

Jimmy 'Whirlwind' White is an English snooker player, nicknamed for his fast style of play. Ranked second in the mid 1980s, he has won several ranking and non-ranking finals, including the 1984 Masters and the 1987 and 1992 British Opens.
3. What colour do Audrey Hepburn's 'Mansions', the bottom stripe of the flag of Lesotho, and a Lantern with a magic ring have in common?

'Green Mansions' is a film based on the novel of the same name by William Henry Hudson, and stars Audrey Hepburn as Rima, a primitive girl who lives in the Venezuelan jungle.

The flag of Lesotho features three horizontal stripes: a blue one at the top, a white one in the middle, and a green one at the bottom. In its centre is a black mokorotlo, a straw hat worn by the Basotho people.

The 'Lantern' in question is the Green Lantern, a superhero created by DC Comics. Several characters under that name have appeared over the years. They possess magic rings which give them a variety of powers; the first Green Lantern, Alan Scott, made his ring from a magic lantern. The drawback was that it was vulnerable against wooden objects.
4. What colour do ExxonMobil's logo, a lorry in a popular tongue twister, and a comedian called Richard Skelton have in common?

The logo of the Texas-based petrol company ExxonMobil is simple red text, usually on a white background.

The tongue twister in question is 'red lorry, yellow lorry'. An English post-punk band from Leeds, whose albums include 'Paint Your Wagon' and 'Smashed Hits', took their name from it.

Red Skelton is the stage name of Richard Skelton, an American comedian who hosted his own TV show, and also appeared on radio and in vaudeville and burlesque shows. He played several comedy characters, including a naughty boy called Junior whose catchphrase was, "I dood it!" He was also an artist, specialising in paintings of clowns.
5. What colour do the robes traditionally worn by the Tuareg people, Duke Ellington's 'Mood', and the snake Drymarchon couperi have in common?

The Tuareg are a nomadic people who mainly live in the Sahara desert, ranging from Algeria to Burkina Faso. They are nicknamed 'the blue people' because of the indigo dyed robes they wear. The Malian folk band Tinariwen are Tuaregs, and perform in their traditional outfits.

Drymarchon couperi is also known as the eastern indigo snake. It is a non-venomous snake that lives in the eastern US, and is one of the country's longest native species of snake.
6. What colour do apricots, the uniform worn by the characters in a drama about a women's prison, and a Protestant movement in Northern Ireland have in common?

Apricots are small stone fruit related to prunes. Apricot is also a shade of orange, as mentioned in Carly Simon's 'You're So Vain' ('your scarf, it was apricot').

The Protestant movement in question is the Orange Lodge, named for William of Orange. Members wear orange sashes and hold marches on 12th July, the anniversary of William of Orange's victory over the Catholic King James II at the Battle of the Boyne.
7. What colour do squid ink risotto, the singer Colin Vearncombe, and Cypress Hill's second album have in common?

Squid ink risotto, or 'risotto nero' (black risotto), is an Italian rice dish made with squid ink, which turns it black. Squid ink is also used in soup in a traditional dish eaten on the Japanese island of Okinawa.

Black is the stage name of Liverpool singer Colin Vearncombe. His debut album, 'Wonderful Life', was released in 1987. He was killed in a road traffic accident in 2016.

'Black Sunday', the second album by the weed-loving hip-hop trio Cypress Hill, was released in 1993. It includes the singles 'Insane in the Brain' and 'I Ain't Goin' Out Like That'. 'Insane in the Brain', incidentally, was covered by the Connells of '74-75' fame, and their version features a sung chorus and the line 'a cracker like me is going insane'.
8. What colour do Ingrid Bergman's 'Rolls Royce', the circle on the IKEA logo, and lemon jelly have in common?

Ingrid Bergman plays the rich widow Gerda Millett in 'The Yellow Rolls-Royce', a film about a car owned by three different people over the course of the story. Millett falls in love with an anti-fascist, played by Omar Sharif, while smuggling him into Yugoslavia in the boot of the Rolls Royce.

IKEA, like Bergman, is also Swedish; it is a chain of furniture stores, with a logo in the colours of the Swedish flag, blue and yellow. The meatballs served in its restaurants are popular with customers.

Lemon jelly, or jello in the US, is a gelatine dessert, usually dyed yellow to match the colour of lemons. Alcoholic variants can be made by using spirits such as vodka instead of water when making the jelly mixture.
9. What colour do the actor who played M in five 'James Bond' films, a dessert called Betty, and the writer of 'The Da Vinci Code' have in common?

Robert Brown was an English actor who played M, the Chief of MI6, in the 'James Bond' films from 'The Spy Who Loved Me' to 'A View to a Kill', after the death of the previous actor, Bernard Lee. The character has also been played by Judi Dench and Ralph Fiennes in the mainstream Bond films, and David Niven, John Huston and Edward Fox in the independent ones.

Brown Betty is a dessert made from layers of apples (though pears or berries can be used instead) and sweetened breadcrumbs, though early recipes called for cracker crumbs. Ronald and Nancy Reagan were fans.

The African elephant is the world's largest land mammal. Elephants are a highly intelligent species, with the ability to use tools and express emotions such as grief. Generally, elephants are grey, although Dumbo had a hallucination about pink ones in 'Dumbo' after getting drunk on champagne.

Lady Jane Grey was the successor to Edward VI. She was only queen for nine days; she was sent to the Tower of London and tried for treason, and later beheaded. She was succeeded by Mary I.
Source: Author Kankurette