There is little, if anything, that connects these ten questions. The quiz is a complete mix of mostly unrelated subjects. Not too difficult.

Quiz Answer Key and Fun Facts
1. Devil's Tower is located in which of the following?

The Black Hills of South Dakota extend into Wyoming and Devil's Tower is included in that range.
2. What English word was derived from the French word for 'forty'?

Originally, quarantine was a maritime detention of a ship in harbor if any members of the crew were suspected of having a contagious infection or disease. In 1385 in the port of Marseille the time for such detention was set at forty days or quaranta days.
3. Which Chief Justice of the United States graduated from the University of Minnesota and obtained his Law degree in St. Paul, MN.?

He obtained his Law Degree from the St. Paul Law College, now known as the William Mitchell College of Law
4. In which city is the World Golf Hall of Fame?

The World Golf Hall of Fame was initially located in Pinehurst, NC. In May 1998 it merged with other golf organizations and was dedicated in the World Golf Village, 8 miles northwest of St. Augustine, FL.
5. In what city is the National Freshwater Fishing Hall of Fame located?

This Hall of Fame was established in Hayward, WI. in 1960 and incorporated in 1970.
6. Which of the following is not true regarding 'Gutta Percha'?


Answer: It is a resin from a South African plant

This is a resin from the Isonandra Gutta tree in the Malay Peninsula. The natives used it for making jewelry and other trinkets. It was imported to Europe and became an excellent waterproof insulation for underewater telegraph cable and electrical wiring.
7. The State of Delaware was named in honor of which of these men?

Thomas West was the First Baron De la Warr and was the first colonial Governor of what became Delaware.
8. When Mount Vesuvius erupted in 79 AD. two Italian towns were completely buried, one of which was Pompeii. What was the other town that was also completely buried during that eruption?

Since 79 AD., Mount Vesuvius has erupted five more times, the last being in 1944. The town of Torre Annunziata was completely buried in the eruption of 1631 and the town of Torre de Greco was completely buried in the eruption of 1794.
9. One method to identify bacteria is to use the Gram's stain. Bacteria are grown in the laboratory, transferred to a glass slide and treated with Gentian Violet. They are then washed with Gram's solution and if they still retain a blue color they are gram-positive. If they are decolorized, they are gram-negative. Which of the following is not true?

Mycobacterium tuberculosis may or may not retain the blue color and it is classified as gram-variable.
10. Which liqueur was originally made in 1510 to combat malaria and it was a brandy grape wine to which were added unique ingredients including juniper, myrrh, angelica, cloves, cinnamon, cardamon, vanilla, tea and honey?

The original recipe was developed by monks in the Fecamp Abbey in France. It was rediscovered by one of the lawyers at the monastery who put it into commercial production.
Source: Author YOMD39 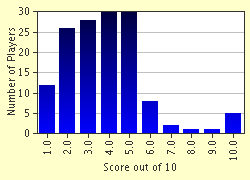 
Other Destinations
Explore Other Quizzes by YOMD39