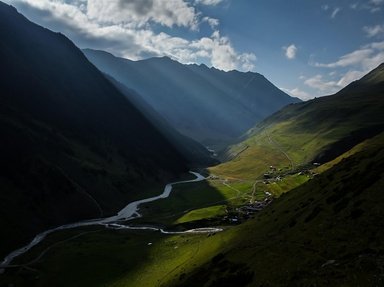 This is a quiz about the former Soviet state of Georgia. I didn't see any others online, so we can make this my ninth Let's Go quiz. Enjoy.

The river also flows through Turkey, where it is known as the river Kura.
2. What political decision made by the Georgian government caused widespread protests in 2003?

The riots let to the resignation of Eduard Shevardnadze in the end. Georgia was one known as the areas of 'Abkhazia' and 'South Ossetia', and both are now provinces of Georgia. Georgia had no intention of giving over land to Azerbaijan, as Azerbaijan has no fishing rights to give to Georgia. Georgia and Azerbaijan border different bodies of water.
3. Which of these places/landmarks is not located in Georgia?

Aragats Lermagatat' is a mountain in Armenia, located a few miles north of the town of Ejmiatsin.
4. Which of these Georgian settlements is not considered to be a city?

The official language of Abkhzia is Abkhaz, as Abkhazia was once a separate area to Georgia.
6. Which of these is not a Georgian port/harbour?

Rust'avi is a town south of Tblisi, on the river Mtkvari.
7. Georgia has a problem with immigrants coming into the country. True or False?

In fact, Georgia's immigration rate is -2.3%, meaning that people are leaving Georgia at quite a high rate.
8. Most countries are known by a different name in their own tongue. What is Georgia known as in Georgian?

Sak'art'velo is the local short form. Georgia does not have a long form for it's self. Most countries, however, do have a local long form, such as the United States of America for the U.S.
9. How many years after the independence of Georgia was the constitution adopted?

Georgia became independent on April 9, 1991. The constitution was adopted on October 17, 1995.
10. Georgia has borders with which four countries?

Georgia does not have a border with Ukraine, although Ukraine does prove to be a bigger export and import partner with Georgia than Armenia does.
Source: Author Flynn_17

This quiz was reviewed by FunTrivia editor minch before going online.
Any errors found in FunTrivia content are routinely corrected through our feedback system.
Related Quizzes
1. All About the Nation of Georgia Average
2. Georgia's Strength is in Unity Average
3. I'm Where In Europe - I Average
4. European Geography - Some Basics Tough
5. Basic European Geography Average
6. Do You Know Europe? Average
7. I'm Where In Europe - II Average
8. Pot Pourri of European Countries Average
9. Geography of Europe Average
10. Sweden or Switzerland? Average
11. European Countries & More Average
12. The Continent of Europe Average


Other Destinations
Explore Other Quizzes by Flynn_17