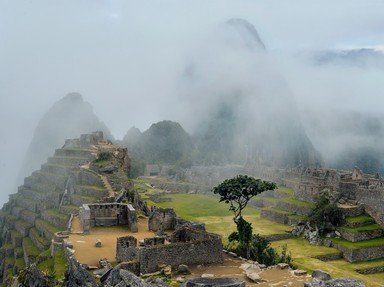 A mysterious and tragic creature from the past.

Share on Facebook
Share on Twitter
Share by E-Mail
Author
russalka
Time
3 mins
Type
Multiple Choice
Quiz #
370,235
Updated
Dec 03 21
# Qns
10
Difficulty
Average
Avg Score
7 / 10
Plays
220
This quiz has 2 formats: you can play it as a or as shown below.
Scroll down to the bottom for the answer key.

Quiz Answer Key and Fun Facts
1. Who was Juanita, the Ice Maiden?

She was an young Incan girl, about 14 years old, whose frozen body was found on a mountain in Peru, where she is known affectionately as mummy Juanita. She had died around 1470.
2. On what mountain in the Andes was she found?

Mt. Ampato is located in southern Peru, close to Chile and Bolivia. Lima, Cuzco and Machu Picchu are north of it.
3. Who discovered her?

In September 1995, National Geographic explorer Johan Reinhard and his assistant Miguel Zarate, were climbing Mt. Ampato, an extinct volcano 20,702 ft. high, in order to observe another active volcano nearby, Mt.Sabancaya, which had been erupting.
Close to the summit, they noticed a bundle wrapped in cloth, lying in the snow. At first, they thought it was a lost backpack, but when they turned it over, they stared on the face of a girl. The ashes from the eruption had melted the snow at the top, causing part of the ridge to collapse.
4. What caused Juanita to die at the top of a mountain?


Answer: She had been sacrificed to the gods

It has long been known that the Incas practised Capacocha, a sacrificial offering of children to the gods, as chronicled by the first Spaniards who arrived there.
In time of crises, such as drought, epidemics or earthquakes, they thought they had displeased the gods of the mountains and tried to appease them by offering their most valuable asset, their children.
5. What was the reaction of families to the sacrifice of their children?


Answer: They felt honored to be chosen

The children sacrificed belonged to noble families and had to be pure and physically perfect. They brought honor to their parents, and after death they would become gods.
6. The capacocha was a celebration performed with great pomp.

Young children were selected because of their purity, which made them so much more worthy of the gods. They were taken from their families and prepared for sacrifice in advance. To this end they were fed food high in protein and sent on exerting hikes at high altitudes.

When the time came, an elaborate procession of priests took them up the mountain. On the way to the summit, the remains of stations have been found, with platforms, tent poles and pottery.
7. How was Juanita taken down from the mountain by Reinhard?


Answer: By backpack and donkey

Reinhard and Zarate had to remove Juanita immediately, because she could have been destroyed by the hot ash from the volcano, or taken by looters. Being frozen, she weighed about 90 lbs., so Reinhard carried her on his back, until they were able to find a donkey farther down the mountain. Then by bus to Arequipa, the closest town, where she was immediately refrigerated to avoid damage.
On later expeditions, Reinhard discovered several other human sacrifices on five mountains in the Andes of Peru and Argentina.
8. What caused her death?


Answer: A blow to the head

She had been hit on the side of the head with a heavy object. But examination showed that she had been heavily sedated beforehand with coca leaves and chicha (corn beer).
9. What were her clothes like?

Her clothes were the finest Incan textiles ever found, made of alpaca wool and in perfect condition. With her were found, among other things, statuettes and shawl pins made of silver and gold, a belt, a pouch with coca leaves, two bowls and a tiny sandal.
10. Where was scientific testing about Juanita conducted?


Answer: In the US

In 1996, Juanita was flown to the John Hopkins University in Maryland. There chemical tests of her hair and a CT scanner revealed that her bones were healthy, and she had eaten a vegetable meal shortly before dying. They also discovered that she had been killed by a heavy blow to the right temple.
At the time she was displayed to the American public in Wshington, D.C. Now she can be seen at the Andean Museum in Arequipa, Peru.
Source: Author russalka

This quiz was reviewed by FunTrivia editor bloomsby before going online.
Any errors found in FunTrivia content are routinely corrected through our feedback system.
Most Recent Scores
Jan 18 2023 : Guest 47: 4/10
Dec 02 2022 : Guest 174: 5/10 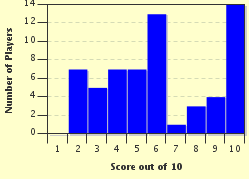 
Other Destinations
Explore Other Quizzes by russalka