Drink It Up! Trivia Quiz

Who doesn't love a good cuppa? Come along and see how much you know about different teas and how to drink them. Good luck!

Quiz Answer Key and Fun Facts
1. One of the first things to decide when choosing a tea is how aged, or oxidised, you want it to be. Of the following, which type of tea has undergone the least oxidation?

While there is no internationally agreed definition of what exactly constitutes white tea, it is definitely accepted as the least processed of the main types. Of the options in the question, black tea is the most oxidised, followed by oolong, green and finally white. White tea does not go through any rolling or oxidising, meaning that it is often bought as unopened buds that are then brewed whole.

Despite the name, brewing white tea will not give you a white drink, it will usually be yellow in appearance.
2. Tea is typically broken down into five large categories, of which black, green, white and oolong are four. Which earthy Chinese tea makes up the fifth category?

Named for the town of Pu'er in Yunnan province in China, pu-erh tea is typically fermented, and can undergo ageing for several years. This makes it even earthier than typical black tea, although it is known as 'hēichÃ' in China, which does translate as 'black tea'.

The tea known in the West as 'black tea' is usually called 'hµngchÃ', or 'red tea' in China. Pu-erh tea is usually sold as a single large piece and can be purchased in various different shapes, including square, disc and mushroom.
3. Black tea is by far the most popular in terms of worldwide consumption. As a result of its light flavour, which black tea is sometimes called the 'champagne of teas'?

Darjeeling tea is named for a town in the northern section of the Indian state of West Bengal, close to the border of the other state of Sikkim to the north and the country of Nepal to the west. The tea produced in Darjeeling is often subdivided depending on the time of year that it was harvested. For example, 'first flush' is harvested in mid-March, and has a lighter flavour than the 'second flush' that is harvested in June.

Finding authentic Darjeeling tea is somewhat troublesome, with almost four times as much 'Darjeeling tea' sold annually than produced on the tea estates in Darjeeling that are allowed to brand their tea as such. While Darjeeling tea is typically prepared black, it is also available in green and oolong varieties.
4. While much of the world's tea is produced in China and India, many different countries produce their own varieties. Which of the following is made in Turkey, not in East Asia?

Rize tea is predominantly grown in Turkey, in the province of the same name adjacent to the Black Sea. It is served in narrow-middled glasses and is often accompanied by beet sugar crystals or normal sugar cubes.

Of the incorrect answers, Congou is produced in China, while Kangra is produced in India. While Assam tea is also named for a region of India, it also refers to a variety of the tea plant camellia sinensis that has larger leaves than those grown in China.
5. Combining different base varieties of tea can create completely new flavours, some of which have become very popular in their own right. Mixing oolong, keemun, and lapsang souchong, which blended tea is known for its smoky flavour?

The caravan in the name of Russian caravan does not refer to the modern holiday convenience, but instead to the camel trains that were used to transport the tea from East Asia to Europe via Russia during the 18th Century. The smoky flavour with which Russian caravan is associated is believed to come from the smoke-dried lapsang souchong, though this is omitted is some blends. Of the incorrect answers, S—der tea is a Swedish blend of black tea and tropical fruits, Prince of Wales is an afternoon tea with a Keemun base, and Suutei tsai is a Mongolian milk tea beverage.
6. Another blended tea is English breakfast, typically combining Assam leaves with other black teas. Which occupation gives its name to a style of drinking English breakfast, typically brewed strong with a tea bag as opposed to loose leaf?

Builder's tea is so-named as builders (particularly in the UK) like to enjoy a cup of tea whilst on the job. It is typically brewed in a mug using a tea bag, rather than the traditional 'loose leaf in a pot' approach. It contains a small amount of milk (adding to the dark colouration), and may contain sugar depending on the preference of the builder.

The English breakfast blend is designed to be accompanied by milk and can contain leaves from countries as far apart as Sri Lanka, Kenya and China in a single bag.
7. In addition to blending, the flavour of tea can be adjusted using additives such as flowers, herbs or spices. Which of the following teas has NOT been flavoured with its namesake substance?

The name 'gunpowder tea' comes not from the fact that the tea contains gunpowder, but instead from the shape of the leaves; each leaf is rolled into a ball that resembles gunpowder. The rolling of the leaves makes them less susceptible to damage during transport and storage, and they thus maintain more of their flavour. Gunpowder tea is notably exported from its native China to the Maghreb region of North Africa, where it is combined with fresh mint to make traditional Maghrebi mint tea.
8. Kahwah is a drink that infuses green tea with the flavours of saffron, cinnamon and cardamom. Usually prepared in a kettle known as a samovar, in which of these countries would you most often see kahwah consumed?

The exact origin of kahwah is not known, though it is though to have been around for more than a millennium. It is largely consumed in Central Asia, notably in Afghanistan and in the Kashmir Valley. Kahwah is typically served without milk, though milk may sometimes be added when the drink is given to the sick or elderly.

The samovar is a metal kettle-like device used widely across Eastern Europe, Russia and Central Asia.
9. Green tea is the most popular type of tea in Japan, with the whole-leaf sencha variety widely consumed. Which powdered tea, often contrasted with sencha, is also produced in Japan?

Matcha differs from the vast majority of teas in that it is designed to dissolve in liquid, rather than infuse. It is used in the traditional Japanese tea ceremony, the ritual preparation of tea influenced by Zen Buddhism. Ceremonial grade matcha (that can be used in the tea ceremony) is very expensive, and can sell for more than $100 for 100 g. Of the incorrect answers, houjicha is the only other variety of tea. Unlike most Japanese green teas (that are steamed), houjicha is roasted to prevent oxidation.
10. The name 'tea' is traditionally used to refer to drinks prepared from the leaves of the camellia sinensis plant, though it has also been extended to refer to similarly prepared beverages. To the purist, what word can be used for these herbal infusions?

The word 'tisane' can be used to refer to both herbal and fruit infusions, typically branded as 'tea' in the UK and US due to the way they're prepared. Herbal teas are often said to have health benefits, and popular infusions include hibiscus, chamomile and ginseng. Both the South American yerba mate and the South African Rooibos are both technically tisanes as they are not made from the camellia sinensis plant.

Of the incorrect answers, yuenyeung is a Cantonese beverage combining coffee with Hong Kong milk tea, Jagertee is an alcoholic beverage that combines rum with black tea, and Kombucha is a fermented tea drunk for its health benefits in China and Eastern Europe.
Source: Author pagea 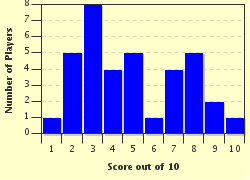 Related Quizzes
1. It's Five O'Clock Average
2. Herbal Tea...A Gift from Mother Nature Easier
3. Sit Down and Enjoy a Cup of Herbal Tea! Average
4. Tea or Coffee? Tough
5. Polly Put the Kettle on Average
6. Green Tea Tough
7. Everything Stops for Tea Tough
8. So You Want to Be a Magical Tea Average
9. Tea Difficult
10. My Cuppa Tea Tough
11. Please Pass the Sugar Easier
12. Teas Around The World Average


Other Destinations
Explore Other Quizzes by pagea