This quiz is for the serious grub gurus, the professional pie hole stuffers, and for everyone else who likes to throw down when it comes to the dining table. Good luck and good eating!

Quiz Answer Key and Fun Facts
1. This traditional Jewish dish typically involves "dumplings" made of schmaltz, among other things.

Matzah balls are placed in steeped chicken stock to cook the dough. They are served in the broth they were cooked in. Depending on the skill of the cook and density of the balls, some will "sink" and others will "float" in their broth.
2. In many Latin tapas restaurants, this dish is a favorite; it usually involves raw cubed fish, onions, and fresh herbs that are then doused in lime or lemon juice. The acidity cooks the fish and breaks down the onion while still maintaining the flavor and structure of the fish. What is it?

This dish is typically served chilled and often is accompanied by fresh vegetables and fruits.
3. To serve something au gratin means to

A la mode is add ice cream, frito is fried, a la carte is served by itself.
4. You're looking for a nice meat substitute for a dinner guest who is vegetarian to replace beef tips. Which of these would be a good option?

Mushrooms very easily take on the flavor of the grill or marinades so they're an excellent choice if you need to make a vegetarian dish.
5. You're craving some nachos, not just cheese and tortilla chips, but the real deal piled high nachos. Which of the following would you probably NOT see on your plate if you ordered nachos at an authentic Latin joint?

Mostaza means mustard, and unless you're into revamped and modified nachos, this normally won't be a Latin staple.
6. What does the term Bolognese refer to?


Answer: an Italian meat based ragu

Bolognese sauce is fantastic with simple flavored things such as plain angel hair pasta. Don't forget the garlic bread!
7. When in the mood for all American food like burgers and onion rings, to which of these might you pay a visit?


Answer: a dive or a joint

Dives, also associated with diners and the like can often be hole in the wall, mom and pop type of places that serve out some great American fare with their own special twist.
8. When a piece of meat has a good combination of fat and lean protein and it is clearly visible, chefs will say the meat is which of these?

Marbled meat, especially in beef, usually provides for extra tenderness and flavor.
9. Where does the chip butty hail from?

The chip butty is traditional british fare: french fries on buttered toast, usually served with ketchup or vinegar.
10. Which of the following expressions is used in reference to giving a toast during a meal in an Italian or Spanish environment?

Salud means health and so they toast to it before sitting down to a hearty meal of something more than likely involving carbs. So, salud to you- may you always have an open heart, willing tastebuds and a hungry stomach!
Source: Author hmme224 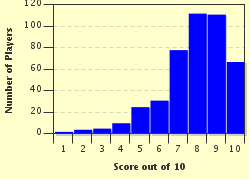 
Other Destinations
Explore Other Quizzes by hmme224