States are often vocally proud of local produce. How many of these official state foods can you identify?

The potato is an ancient New World food, introduced to Europe in 1500s. The word "potato" derives from Spanish word "patata" which derives from the Nahuatl word "potatl". The average American consumes 140 pounds of potatoes per year. Idaho farmers grow a lot of potatoes, which became the state vegetable in 2002.
2. Utah has a jiggly official state snack, adopted in 2001. What is it?

Long a favourite of the United States Senator from Utah, Mike Lee, Utah adopted Jell-O as its official state snack. Lee hosts Wednesday afternoon "Jell-O with the Senator" parties at his Washington, D.C., office. The enabling legislation in the Utah state legislature recognized that "Utah has been the number one per capita consumer of Jell-O® brand gelatin for many years."
3. North Carolinians couldn't decide which berry they liked best so they adopted an official red one and an official blue one. Which pair?

Both strawberries (genus fragaria) and blueberries (genus vaccinium) are grown throughout North Carolina. The two berries were adopted as co-state-berries in 2001. It was a sort of compromise.
4. Many states have adopted state fish but how many have adopted their own official bivalve? Which state adopted the Olympia oyster (Ostrea lurida) as its own?

Acting in 2014, the state legislature of Washington adopted the Olympia oyster, which is the only oyster native to the Pacific Northwest. The bill stated "This native oyster species plays an important role in the history and culture that surrounds shellfish in Washington State and along the west coast of the United States." Connecticut, Mississippi, Virginia and Louisiana also use oysters as state symbols but only Washington has the Olympia oyster.
5. The state fruit of Ohio is unfamiliar to many. It is the largest edible fruit native to the U.S. Name it.

The Pawpaw (Asimina triloba) is a deciduous tree native to the Eastern United States. It produces a large fruit similar to a custard-apple or cherimoya. The fruit is sweet and is normally eaten raw. Ohio adopted the Pawpaw as its state fruit in 2008.
6. The chanterelle is the state mushroom of which Western state?

Oregon adopted Cantharellus formosus, the pacific golden chanterelle, as its state fungus in 1999. The grotesque but tasty mushroom grows extensively in Oregon. Harvest is July to December. The adopting legislation says "the Pacific golden chanterelle is coveted for its culinary, nutritional and medicinal value."
7. While not technically a state food, the State of Arkansas adopted a state cooking vessel in 2001. Which piece of cooking gear is it?

The state's website says "Peach farming is an important part of Delaware's agricultural heritage, as the peach was introduced to Delaware in Colonial times and expanded as an industry in the nineteenth century." Sponsored by fifth and sixth grade students at St. John's Lutheran School in Dover, the peach pie was chosen as the state dessert.
9. Louisiana is the only state with an official state jelly -- two, in fact. What are they?

Louisiana chose these two jellies to represent itself in 2003. Mayhaw (Crataegus Aestivales) grows wild in the bayous. The fruit is collected by boat and made into jelly. Sugar cane jelly is made by reducing raw sugar cane juice by boiling. The result is surprisingly not overly sweet. A variety of sugar cane jelly is made with chopped hot peppers added.
10. Florida's state beverage is orange juice. About nineteen states have adopted milk as theirs. What is Maine's official state soft drink?

Moxie has a slightly bitter flavour which is, perhaps, an acquired taste. It was one of the first commercially produced soft drinks in America (1876). It is made in Bedford, New Hampshire, was invented in Lowell, Massachusetts, by a medical doctor from Union, Maine. Maine adopted it in 2005. The name has entered the language as a word meaning "guts, spirit, daring or gusto."
Source: Author FatherSteve 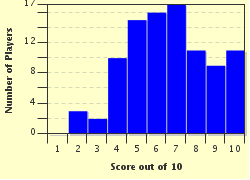 Related Quizzes
This quiz is part of series Culinary Miscellany:

This is a collection of all of my quizzes about food which are NOT part of my lengthy "Cooking Terms" series. Bon appétit!