Do you enjoy tea? Then this quiz shouldn't be too challenging.

Quiz Answer Key and Fun Facts
1. What ancient Chinese figure is said to have discovered the use of tea?

Shen Nong was later deified as the god of agriculture...as he was considered the first farmer!
2. The spicy, milky tea from India is called what?

Chai usually contains spices such as nutmeg...very delicious!
3. What Chinese priest was called 'the tea maniac' because he devoted his entire life to tea?

Lu Dong, a Daoist priest of 8th century Tang China, was so inspired by a poem by Chinese poet Lu Yu (called the 'Chajing') that he decided to spend his entire life looking for the perfect tea preparation!
4. Which of the following tea names translates to 'Black Dragon' in English?

'Long' means dragon in Chinese, while 'oo' (or 'ou') is a term for dark, black or murky.
5. What tea is named for a British prime minister?

Earl Grey was PM from 1830-1834...he loved his tea! Earl Grey tea derives its special flavor from bergamot.
6. Which Indian tea is the base for Irish Breakfast Tea?

Assam is the far eastern province of India, near the border with Myanmar.
7. Young green tea whose leaves are rolled into a ball have what nickname?

8. Which tea can be described as 'Fujianese black, smoky tea which is produced by leaves shrivelled over pine fires'?

Fujian is a province of southern China, just opposite Taiwan.
9. According to Japanese custom, should green tea be drunk with or without milk and sugar?

Most Japanese would be horrified by the addition of milk and sugar, a common custom for us Western folks!
10. How do you say tea in Mandarin Chinese?

The word for tea in many languages is derived originally from the Chinese. For example, the English word 'tea' (from the Fujianese pronunciation).
Source: Author thejazzkickazz 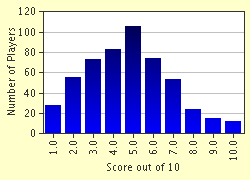 Related Quizzes
1. It's Five O'Clock Average
2. Teas Around The World Average
3. A Storm in a Teacup Average
4. Herbal Tea...A Gift from Mother Nature Easier
5. What's Brewing in the Teapot? Average
6. Green Tea Tough
7. Please Pass the Sugar Easier
8. Drink It Up! Average
9. So You Want to Be a Magical Tea Average
10. Ten Tan Tin Teas Average
11. Tea: A Global Refreshment Average
12. Everything Stops for Tea Tough