People the world over enjoy tucking in to dishes that to the mere mortal tastebud would be unbearably hot. Here's a quiz on all sorts of spicy titbits - written as part of Commission XXIV!

Quiz Answer Key and Fun Facts
1. Before diving in to the first dish on the FunTrivia menu of extremely spicy foods, we must first establish how 'spicyness' is measured. What is the name of the scale which is used to measure the spicy heat of a food, especially chili peppers?

The Richter scale measures earthquakes, and the Beaufort scale measures wind strength. The McReedy scale is made up. Scoville heat units (SHU) are used to measure the amount of capsaicin (the hot bit of a pepper) in a chili. Your average salad Bell Pepper is 0 SHU; Tabasco sauce is around 2,500-5,000 SHU; and law enforcement pepper spray is around 1.5-2 million SHU!
2. This particular chili is renowned for being the bad boy of peppers. Registering at over 1 million Scoville units, for several years it was certified by the 'Guiness Book of Records' as the hottest chili in the world. In fact, in 2009, scientists in India were developing ways of incorporating this pepper into anti-terrorist grenades and personal protection aerosols. Which is it?

Pimento and chipotle chilis are relatively mild, though the Scotch bonnet is somewhat spicier. The Naga chili, however, is 400 times hotter than Tabasco sauce. In northeastern India, it is smeared on fence posts to keep away wild elephants, it is that hot!
3. At well over ten times hotter than a jalapeno pepper, Scotch bonnet peppers are a sweet but fiery addition to cuisines worldwide. However, they are particularly popular when used in which style of international cuisine?

Though so called a Scotch Bonnet because of its resemblance to the Scottish Tam O'shanter hat, you certainly won't find this chili flavouring your haggis!
4. Some of the hotter ingredients in a curry release endorphins, or 'feel-good' chemicals, into the blood stream and may act as an aphrodisiac.

Research has also found that some curry ingredients may help to prevent some illnesses such as colon cancer and Alzheimer's disease. Spicy chilis also help to improve circulation around the body, and hot ginger can help to alleviate nausea.
5. Which highly-populated country, famed for its curries and spicy cuisine, supplies around 70% of the global spice market?

In 2010, India produced 1,051,000 tonnes of spices for the global food industry. To put that in to perspective, the second largest producer of spices, Bangladesh, produced just 128,517 tonnes.
6. The Brick Lane Curry House, New York City, is famous worldwide for challenging their customers to eat their "phaal" (or phall) curry - a curry so hot that similar challenges exist around the world looking for folk brave enough to eat this dish. But from where (according to Wikipedia) does phaal originate?

Phaal originates in UK restaurants, believe it or not, and holds the fearsome reputation of being the world's hottest curry. It is made with a combination of 10 types of hot pepper, often including the infamous Naga chili, plus Scotch bonnet and habanero peppers.
7. The name of which notoriously hot curry, particularly popular in the region of Goa, is shared with the 1998 hit football anthem by British band Fat Les?

Vindaloos often feature on Indian restaurant menus as the being the hottest curry served. Of course, as we've seen above, it isn't the hottest in the world, but just about the warmest that most people can cope with! The song in question was written by Blur bassist Alex James and released for the 1998 FIFA World Cup.
8. 'Kimchi Jjigae' is a Korean broth of kimchi, mushrooms, tofu, garlic, and chilis - lots of them. This chili overload has earned the kimchi jjigae the title of one of the world's spiciest dishes. What on Earth is kimchi, though?

Kimchi Jjigae further earns its reputation as a bit of a hotty by usually being served at just below boiling temperature to really get those sweat glands activated!
9. This chili is small but deadly. Also called the 'Thai chili', or Capsicum chinense, it originates in southeast Asia and packs at least 50,000 Scoville units-worth of heat. It is mainly red or green, and shares its name with a British frozen food company. Identify it.

Bird's Eye chilies were also traditionally used medicinally to treat arthritis, indigestion, toothache and flatulence! They are apparently also useful insect repellants when mixed with water. The other options are all names of British frozen food companies, just to keep with the question.
10. A nice glass of cold water is just the thing you need if you're finding your meal too spicy and need to cool your mouth down.

Milk and other dairy products counteract some of the effect of capsaicin, the spicy element of a pepper, so a glass of milk is the best thing to drink with a hot meal. Water just spreads the spice around, and only slightly dilutes it, so is less likely to have any beneficial effect.
Source: Author crazy baby 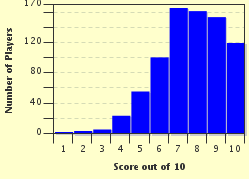 
Other Destinations
Explore Other Quizzes by crazy baby