You don't need to be a dictionary to know this stuff.

Quiz Answer Key and Fun Facts
1. Which author is considered the father of the 'Ecole Naturaliste' (literature, mainly)?

For those who answered Balzac: Zola is considered the author who pushed Balzac's realism to its limits.
2. What did Max Brod do?

Who could blame him? (For those who might not know, he was told to burn all of Kafka's unpublished fiction by the author himself)
3. Where is 'The Lady and The Unicorn' displayed?

Lovely set of paintings, wonderful wonderful museum.
4. Which was a group of mainly homosexual Cambridge intellectuals?

Among others, Keynes and Strachey. For those who thought of the 'circle', it was Viennese, not English.
5. Where was Samuel Beckett's 'Waiting for Godot' written?

Most of his work was actually written in French.
6. 'We will always have Paris' is quoted by Woody Allen in what film?

If you didn't know this, you should either see this movie or go and see it again. It's just wonderful.
7. Which of these women was married to Roman Emperor Claudius?

This woman was pure evil.
8. Who painted them fatter, Rubens or Botero?

And probably no one painted them fatter than he did.
9. Which one of these prizes does not exist?

Booker is, well, for books. As is Goncourt. The Pritzker is awarded to architectural works.
10. How many children did Johann Sebastian Bach (1685-1750) have?

12. 'Whereof one cannot speak, thereof one must be silent' is THE classical quotation of which book?

He wrote most of it while a POW in the Great War.
13. Which one of these historical events is NOT currently being questioned by academic experts?

14. Which one of these couples did NOT have any major fights?

Simone de Beauvoir sat all night by Sartre's coffin when he died.
15. Gala left which of these fellows for Dali?

Hope you did not even think of Zubizarreta...
16. Who was considered the most important poet of the symbolist movement?

Proust didn't have the time, really.
17. According to Stravinsky, who was better at chess than he was at composing?

He must have been REALLY good at chess.
18. Dante's muse.

In his 'Divine Comedy', it is Beatrice who guides him through Paradise.
19. Which one of these remarkable fellows did NOT die somewhat handicapped?

His head was allegedly working fine until he lost it. Homer and Borges went blind, Goya went deaf.
20. Which of the following is NOT true?


Answer: Before 1492, the earth was believed to be flat 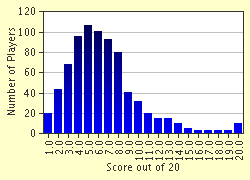 
Other Destinations
Explore Other Quizzes by asquare