This is the third and last of my slang quizzes. Have a good time and enjoy!

Quiz Answer Key and Fun Facts
1. Have you ever been "Happy as a clam at high tide"? I'm sure you have, but why a clam? Why high tide?


Answer: clams are safe from predators at high tide

This term has been in use since the early 18th century. It is thought to have originated in New England. It was presumed that clams feel safe and content during periods of high water due to lack of predators, namely humans.
2. A sudden, fierce rain storm might be described in what totally illogical manner?


Answer: It's raining cats and dogs

"Raining cats and dogs" comes from 17th century England. Excessive rain and unsanitary conditions could cause the carcasses of dead animals to be washed into the streets.
3. Uncle George was complaining about an automobile he had purchased. He said he had bought a "pig in a poke". What did he mean?


Answer: he had purchased an item unseen

A poke is an old term for sack or bag. Still in use in rural America, the term comes from an old English poem dated 1555. "I will neur bye the pig in the poke". In other words, make the seller let the pig out so you can see him.
4. If someone told you it was time to "face the music", what would he be advising you to do?


Answer: take responsibility for a misdeed

The phrase has been used in America since the mid 19th century, and possibly refers to an actor stepping out on the stage and facing the orchestra pit, beyond which is the audience, to deliver his lines. Another school of thought is that it referred to an officer being drummed out of military service.
5. From what US president do we get the advice, "If you can't stand the heat, get out of the kitchen"? In other words, get on with the task at hand or get out of the way. He served as Franklin D. Roosevelt's vice president.

This phrase is still widely used in the U.S. Records showed Truman first used it in a 1942 memo in which he advised some aides who were complaining about their workload.
6. If someone is "trying to pull the wool over your eyes", what is he attempting to do?

This comes from the early 19th century. A Milwaukee newspaper described a local politician's trickery as "an attempt to pull the wool over the eyes of the people". It may spring from a time when wearing a woolen wig was a popular fashion statement, especially among the wealthy.
7. A person who's not in control of his emotions or actions and who can do a lot of collateral damage may be described as what?

This term comes from an 1874 Victor Hugo novel in which he describes a ship's cannon which has broken loose from its moorings and causes several fatalities among the crew. It was quoted in a news article in 1889 and became a part of American English.
8. If you refer to two people as being "joined at the hip", what are you implying?


Answer: that they are inordinately close

It may have originally been a reference to Chang and Eng Bunker, Siamese twins who lived in the 1830's, although they really weren't joined at the hip, but at the chest. The phrase seems to have appeared about 1960; the first reference was a newspaper article declaring that Cal Tech (California) and the Pasadena chamber of commerce seemed to be "joined at the hip."
9. If someone "gilds the lily", what faux pas has he or she committed?


Answer: added unnecessary adornment to something

The idiom as originally used was "gild the lily and paint the rose". Even this is a misquote. It comes from Shakespeare's "The Life and Death of King John". In part, the line was "to gild refined gold, to paint the lily, to add another hue to a rainbow ... is wasteful and ridiculous excess".
10. My Aunt Martha told me that upon meeting my Uncle George for the first time, she was "on cloud nine". In what condition would you be if you were on cloud nine?


Answer: you are deliriously happy to the point of being oblivious to your surroundings

"Cloud nine" was popularized by a 1950's detective show on radio called "Johnny Dollar". The hero, when knocked unconcious, would be transported to cloud nine where his alter ego would feed him clues and help him solve a crime. Being drunk had been described as being on "Cloud Eight".
Source: Author Pick61 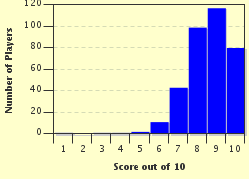