Who doesn't love the dashing men from Jane Austen's novels? Take this quiz and see how well you know them!

Quiz Answer Key and Fun Facts
1. Fitzwilliam Darcy, from "Pride and Prejudice", is perhaps the most famous Austen hero. Extremely rich and consequential, he is described in all of the following ways EXCEPT:

Mr. Darcy is one of the richest Austen heroes from any novel. His wealth, however, doesn't soften Elizabeth Bennet towards him. She considers him proud and rude. Mr. Darcy is first introduced to the reader as an eye-catching man, with his "fine, tall person, handsome features, noble mien..." Of course, he is also called "proud", "above his company", and "above being pleased".

As Elizabeth begins to learn more about him, though, she finds that he is a caring brother, fair landlord, and kind master.

His apparent coldness masks an inherently reserved, but not mean, nature.
2. In "Pride and Prejudice", Charles Bingley is the object of obsession for the Bennet family. How does he appear at the Meryton assembly?

"Pride and Prejudice" opens with Mrs. Bennet informing her spouse that a wealthy bachelor has taken residence into their neighborhood. She gushes about his "large fortune" and is determined that one of her daughters should marry the newcomer. Fortunately, Mr. Bingley is attracted to the eldest Bennet daughter, Jane, from the onset.
3. Edward Ferrars, from "Sense and Sensibility", falls in love with Elinor Dashwood. To whom is he secretly engaged?

Mr. Ferrars is engaged to Lucy, but he loves Elinor. He became engaged to Lucy while he was young, and five years before he met Elinor. He internally battles feelings of loyalty and desire, but is eventually saved by Lucy's own fickle nature!
4. In "Sense and Sensibility", Colonel Brandon cherishes tender feelings for Marianne Dashwood. Why does she scorn his affection?


Answer: She thinks he's too old.

Colonel Brandon appears in the novel as a staid, sensible, and somewhat morose figure. The Dashwoods later learn of his painful history: his first love, Eliza, had been forced into an arranged marriage with his brother. She ended up dying in a very sorry state, and left behind an illegitimate child. Colonel Brandon finds love again in the arms of Marianne Dashwood.
5. Marianne Dashwood's first encounter with John Willoughby in "Sense and Sensibility" is quite memorable. How do the fiery lovers meet?


Answer: He rescues her when she sprains her ankle

Mr. Willoughby literally sweeps Marianne off her feet. When he lifts her in his arms, she instantly falls in love. Mr. Willoughby is like any storybook hero--without the happily ever after.
6. In "Northanger Abbey", Henry Tilney is shown to be extremely intelligent and well-versed in all subjects. He can discuss everything from religion and poetry to women's fashions. What does he find so enchanting about Catherine Morland?


Answer: Her candid and artless nature

Mr. Tilney is a well-read gentleman, fond of making absurd small talk. He enjoys wordplay, particularly with the innocent Catherine. Most of his double entendres are missed by Catherine, and she is frank enough to admit it.

One famous dialogue between Catherine and Henry:

Catherine: "I do not understand you".

Henry: "Then we are on very unequal terms, for I understand you perfectly well".

Catherine: "Me? Yes; I cannot speak well enough to be unintelligible".
7. George Knightly, from "Emma", is a neighbor, friend, and regular member of Emma Woodhouse's social circle. Among Emma's many acquaintances, what is unique about Mr. Knightley?


Answer: He openly points out her faults

Mr. Knightly is closely tied to the Woodhouse family, being their neighbor and kinsman-by-marriage. He is attracted to Emma, but clearly sees her many character flaws. He is the only person who dares voice an opinion when she behaves badly, and professes "Emma knows I never flatter her". Emma eventually learns to value his honesty, and strives to be worthy of his love and respect.
8. Harriet Smith fancies herself in love with many gentlemen in "Emma". Which man, however, genuinely loves Harriet?

When the reader first meets Harriet Smith, she is already in love with a farmer named Robert Martin. Emma Woodhouse thinks that Harriet can contract a much better alliance, though, and convinces Harriet to turn her attention to Mr. Elton. Unfortunately, Mr. Elton has his sights on Emma, not Harriet, so that love affair dies before it can even begin. Harriet later becomes fond of Frank Churchill, and then Mr. Knightley, only to return to Robert Martin in the end!
9. In "Persuasion", Anne Elliot has been in love with Frederick Wentworth for over seven years. What is his occupation?

Anne's family frowns upon her unsuitable attachment to Captain Wentworth. They cannot, however, overlook the fact that the captain has become very wealthy in the Royal Navy. While it is an occupation that Mr. Elliot finds beneath him, he does approve of Captain Wentworth's good looks and deep pockets.
10. Fanny Price appears in "Mansfield Park" as the stereotypical poor relation. How does Edmund Bertram initially treat Fanny?

When Fanny Price is sent to live with her rich relatives at Mansfield Park, she is overcome with homesickness and fear. Her aunt and uncle are remote figures, and neither exerts any real effort to comfort Fanny. Her wealthy cousins are imperious and condescending. Only Edmund treats her as a friend.

He is kind and protective towards his young kinswoman. She cannot help but love him, and he eventually returns that love.
Source: Author pagiedamon 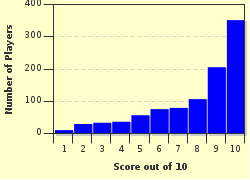 
Other Destinations
Explore Other Quizzes by pagiedamon