This quiz is about some of the best female rock musicians of all time. Most were there at the beginning, back in the 60s. Let's see how many of these rock icons you can identify.

Quiz Answer Key and Fun Facts
1. Her first band was Big Brother and the Holding Company. She loved the blues, she had a voice like no one else, and she never held back. Sadly, she loved to drink and use drugs too, and that was the cause of her death at the age of 27. Who was this Texas-born legend?

Janis Joplin (1943-1970) was born in Port Arthur, Texas. Her first band was Big Brother and the Holding Company; they recorded their first album in 1966. When they appeared at the Monterey Pop Festival in 1967, Janis tore down the house, and from then on she was a star. Unfortunately Janis developed a taste for booze and drugs, including heroin, and often had a bottle of Southern Comfort with her onstage as she performed. Janis was doing some recording in Los Angeles in 1970 when she overdosed in her hotel room, on a combination of heroin and whiskey.

She was cremated, and her ashes were scattered into the Pacific Ocean.
2. She first became known as the lead singer for a new wave band called Blondie. Soon she was a rock icon, a poster girl for the 70s. Who is this Rock and Roll Hall of Famer?

Deborah Ann Harry was born in 1945. She grew up in New Jersey, then moved to New York to work at several jobs, even as a Playboy Bunny, while attempting to make it as a singer. She met Chris Stein and they joined up personally and professionally. Their band, called Blondie, was formed in the mid 70s, and soon they were regulars on the New York rock scene. Debbie became an icon for the period. Harry and Stein split up in 1987. Debbie (now Deborah) Harry began her solo career in 1981, and is still part of the New York rock scene.
3. She formed a songwriting partnership with Gerry Goffin and they wrote great songs together for many years. She released a solo album called "Tapestry" in 1971, and it was one of the best selling albums of all time. Name this Grammy-winning musician.

Carole King was born Carole Klein on February 9, 1942 in Brooklyn, New York. The winner of several Grammy Awards, she's been inducted into the Songwriter's Hall of Fame and the Rock and Roll Hall of Fame, along with her partner Goffin. They met at Queen's College, married, and began working as songwriters out of the famous Brill Building in the 60s.

Their first big hit was "Will You Love Me Tomorrow", recorded by the Shirelles. King finally found success as a singer with the release of "Tapestry" in 1971; it sold an estimated 22 million albums world-wide.

She's made several solo albums since. Carole King is active in environmental and political causes.
4. This English singer's was first hit was "As Tears Go By". She had a long-term relationship with Mick Jagger in the 60s. Unfortunately, she fell into drug abuse and was even living on the street for a time. She eventually made a successful comeback with her album "Broken English". Her voice was unrecognizable, changed completely, from years of abuse. Name this singer.

English singer and actress Marianne Faithfull was born in 1946 in London, England. She began her career in 1964, singing folk rock in coffeehouses. Her first hit was "As Tears Go By". She met Mick Jagger in the 60s; their relationship lasted several years. During that time she became a heavy drug user.

When she split with Jagger, she went downhill fast, and ended up living on the streets of London for two years. She finally got help and attempted to revive her career, releasing the critically acclaimed "Broken English" in 1979. Marianne Faithfull continues to perform and act.
5. This lady was the lead singer for a ground-breaking band called the Jefferson Airplane. She was an influential singer with a powerful vocal style. Name this legendary rocker.

Grace Slick was born in Illinois in 1939, and attended a private girl's school in Palo Alto, California. She was a member of two rock bands, The Great Society and then Jefferson Airplane. Jefferson Airplane later became Jefferson Starship and then simply Starship. Her best-known recordings include "White Rabbit", "Somebody to Love", and "Nothing's Gonna Stop Us Now". Slick has also recorded several solo albums; "Dreams" is considered by critics to be one of her best vocal efforts. Along with her close friend Janis Joplin, Grace Slick was an influential figure in the growth of rock in the 60s.

She left Starship in 1988. After her retirement she began to paint, mostly portraits of rock stars such as Jerry Garcia and Janis Joplin.
6. She was a rarity on the music scene, the leader of a male rock band, called the Pretenders. She found success after years of struggle in the first days of new wave. People loved her edgy and tough attitude. Name this American songwriter, guitarist and singer.

Christine Hynde was born in 1951 in Akron, Ohio. From the time she was in high school, her interest was music. After attending Kent State University, she moved to London in 1973. Hynde struggled for years, and finally joined up with musician Pete Farndon. Together with James Honeyman-Scott and Martin Chambers, they became the Pretenders.

Their first recording together was a critical and popular success, which continued for many years, and through many personnel changes. Hynde continues to record solo and to experiment with different musical genres.
7. She was lead singer with the Stone Poneys in the 60s, and their first hit was "Different Drum". Her beautiful version of Roy Orbison's "Blue Bayou" is her signature song. Later in her career she moved into many different musical areas, recording several albums of big band and mariachi music. Name this artist.

Linda Ronstadt was born in Arizona in 1946. While attending college, she met up with Bob Kimmel, a guitarist. They went to Los Angeles, looking for work in the music business, and Kenny Edwards joined them. They formed a group called the Stone Poneys, playing folk music at clubs.

It was big news when Ronstadt began dating Jerry Brown, who was then Governor of California, in the late 1970s. Linda has become known for her ability to interpret many areas of music, including country, rhythm and blues, opera, Cajun and mariachi music.

She has also recorded two albums with Emmylou Harris and Dolly Parton, called "Trio" and "Trio II". She's the owner of quite a few Grammys.
8. This singer began her career with her then-partner Lindsey Buckingham, in a band called Fritz. They struggled together for several years, until they were invited to join a band called Fleetwood Mac. The band was notorious for the conflicts between its members. Many stormy years later, she's on her own and still packing them in at concerts. Name her.

Stephanie Lynn "Stevie" Nicks was born in Arizona in 1948. She first met her future partner Lindsey Buckingham while attending high school. A few years later they got together with Javier Pacheco and Calvin Roper and formed a band called Fritz, which enjoyed some popularity as a live act.

In 1973, they were invited to join Fleetwood Mac, which then went on to become one of the top-selling bands of all time. But Fleetwood Mac was notorious for personality conflicts, and they went through some very stormy times. Nick's and Buckingham's relationship was especially tempestuous; they all eventually went their separate ways. Nicks has since moved on to a career as a solo artist, with great success.
9. She was born in 1947 and died in 1997, a songwriter, pianist and singer. Her compositions include "Stoned Soul Picnic", "And When I Die" and "Wedding Bell Blues". Her career began in the 60s and she was a major influence in rock music until her untimely death. Name this musician.

Laura Nyro (1947 - 1997)was a composer, pianist and singer, beginning her career in the 60s. Born in the Bronx, New York, she first made her mark as a songwriter. Her best-known songs include "And When I Die" (recorded by Blood, Sweat & Tears), "Stoney End" (Barbra Streisand sang it), "Wedding Bell Blues", "Stoned Soul Picnic", and "Save The Country" (all hits for the Fifth Dimension), and "Eli's Coming" (Three Dog Night). She was a major influence on many composers, including Stevie Wonder, Joni Mitchell, Todd Rundgren, and Rickie Lee Jones. Nyro's style was a mixture of New York pop, with elements of jazz, gospel, rhythm and blues, and rock. Nyro's own best-selling single was a cover of the King/Goffin tune "Up On The Roof." Nyro was not comfortable with fame.

She announced her retirement from the music business when she was 24. Five years later, she returned with an album called "Smile". She began to record and make club appearances again; the critics loved her. Nyro fell ill and died of ovarian cancer in Connecticut in 1997 at the young age of 49.
10. She sang and danced, backed up by the Ikettes. She was married to her mentor, and although he helped make her famous, he also abused her terribly. She spent half her life on the road with their revue, until she finally decided she'd had enough. She went out on her own, and finally released a best-selling solo album. She's an icon today, in a class by herself. Name this lady.

Tina Turner (born Anna Mae Bullock) was born in Nutbush, Tennessee in 1939. She met rock and roll innovator Ike Turner, and joined his group in 1958. Within a couple of years, she was the at the head of Ike's soul revue. They recorded many great songs in the 60s and early 70s, including "A Fool In Love," "It's Gonna Work Out Fine," "Nutbush City Limits," and "River Deep - Mountain High".

Their signature tune was their powerhouse version of Creedence Clearwater Revival's "Proud Mary", and it was their greatest commercial triumph as well. Ike and Tina had one child together, but Tina's personal life began to fall apart. Ike's heavy drug use led to increasingly abusive behavior.

In 1976, Tina left Ike; she fled with a gas-station credit card and no money. Tina ended their marriage in 1978 after 18 years, accusing Ike in court of severe spousal abuse; she left the marriage with no money or property.

She began touring and released several solo albums in the 1970s. When her version of "Let's Stay Together" was released in the United Kingdom, it did well.

It was a turning point for her, giving her the chance to record "Private Dancer", which was to be an enormous hit. She's gone on to become one of the most successful rock artists of all time. She is the winner of several Grammy Awards, and is a Kennedy Center Honoree.
Source: Author robbieh 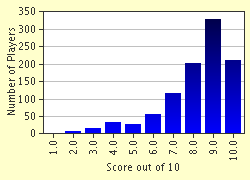 
Other Destinations
Explore Other Quizzes by robbieh