Songs by well known Rock Chicks. I'll give you part of the lyric, you name the song.

Quiz Answer Key and Fun Facts
1. Pat Benatar released this single in 1985. The song begins with these lyrics; "We are young, heartache to heartache we stand No promises, no demands" Can you name the song?


Answer: Love Is a Battlefield

"Love Is a Battlefield" was taken from Pat Benatar's first live album "Live from Earth" released in 1983. The single "Love Is a Battlefield" reached number five on the Billboard Hot 100 and peaked at number 17 on the UK single charts.
2. Sheryl Crow reached number two on the Billboard Hot 100 and peaked at number four on the UK singles chart. The song has these words taken from the chorus; "Until the sun comes up over Santa Monica Boulevard" Can you recall the name of the song?


Answer: All I Wanna Do

Released in 1994, this was the song that put Sheryl Crow on the road to fame. The song was taken from Crow's debut album "Tuesday Night Music Club" released in 1993.
3. Pink (Alecia Beth Moore) had her first number one in the UK with this song. The single reached number eight on the U.S. Billboard Hot 100. Pink sang; "I'm lyin here on the floor where you left me" What was the name of this chart topper?

"Just like a Pill" was taken from Pink's second album "M!ssundaztood" released in 2001 (U.S.A.) and 2002 in the UK. The album produced four singles that reached the charts in the both the U.S and the UK.
4. "Looking out a dirty old window, Down below the cars in the city go rushing by, I sit here alone and I wonder why", These are the opening lines from Kim Wilde early 80s hit. What was the song called?

"Kids in America" was Kim Wilde's debut single, released in 1981 in the UK and 1982 in America. The single reached number two on the UK singles chart and peaked at number 25 on the US Billboard Hot 100.
5. Madonna had an international hit with this song. The second verse has these lyrics; "Faster than the speeding light she's flying Trying to remember where it all began She's got herself a little piece of heaven Waiting for the time when Earth shall be as one" Can you recall the song title?


Answer: If I Could Turn Back Time

Cher is an American pop singer-songwriter and has appeared in several films. Cher was the second half of the duo, Sonny and Cher, way back in 1965. The big breakthrough for the duo was the song "I Got You Babe" released in 1965. The single reached number one on both the U.S. Billboard Hot 100 and UK singles chart. Cher stared in the film "The Witches of Eastwick" which was released in 1987. Cher has picked up several awards in her career including a star on the Hollywood Walk of Fame.
7. This song was the lead single from the album "Back to Black." The second verse of the lyrics has these words; "I'd rather be at home with Ray I ain't got seventy days Cos there's nothing, there's nothing you can teach me That I can't learn from Mr Hathaway" What was the title of this lead track?

The single "Rehab" was released in 2006 (2007 U.S.A.) "Rehab" peaked in at number seven on the UK singles chart and stalled at number nine on the U.S. Billboard Hot 100. The first album by Amy Winehouse was called "Frank" which was first released in 2003. Songs from the album include, "Stronger Than Me", "Take the Box", and "In My Bed"/"You Sent Me Flying".

The album peaked at number 13 on the UK album chart and reached number 61 on the U.S. Billboard 200.
8. Britney Spears released this single in 2004. Britney sang; "Too high, can't come down Losing my head Spinning round and round Do you feel me now?" What song was Britney singing?

"Toxic" is a song taken from Britney Spears' fourth studio album "In the Zone" released in 2003. The song won the Best Dance Recording and also won a Grammy for Britney. In America the song reached number one on several versions of the Billboard, and reached the top spot in the UK.
9. Christina Aguilera had a smash hit with this song. The song was released in 2002 in America and 2003 in the UK. Part of the lyrics has these words; "To all your friends, you're delirious So consumed in all your doom, Ohh Tryin' hard to fill the emptiness" What song was Christina Aguilera singing?

"Beautiful" is track 11 on Christina's second album "Stripped" released in 2002. The song was an International chart success for the American artist. Christina Aguilera debut album was called "Christina Aguilera" released in 1999. Two songs from the album gave the American singer her breakthrough into the charts, with the tracks "Genie in a Bottle" and later "What a Girl Wants."
10. Gwen Stefani topped the charts in 2005 in both the U.S. and the UK with this song. Here is a sample of the lyrics; "People hear you talking like that, getting everybody fired up So I'm ready to attack, gonna lead the pack" What is the name of this popular song?

"Hollaback Girl" was taken from Gwen's debut album "Love. Angel. Music. Baby." released in 2004. Gwen Stefani is also the lead singer for the American band, No Doubt. The band had chart success with the releases of "Just a Girl", "Spiderwebs", and "Don't Speak." The second solo album from Gwen was titled "The Sweet Escape", released in 2006.

The single from this album "The Sweet Escape" reached number one on the U.S. Billboard Pop 100 and stalled at number two on the UK singles chart.
Source: Author Lord_Digby 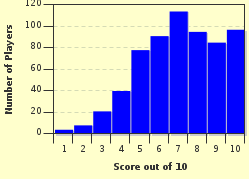 
Other Destinations
Explore Other Quizzes by Lord_Digby