Test your knowledge of the true Mothers of Rock and Roll.

Quiz Answer Key and Fun Facts
1. Who was the first woman to be signed to a major label as a lead guitarist?

Alice Stuart was signed to Arhoolie Records in 1964.It was called "All the Good Times." "Fulltime Woman" was released five years later on Fantasy Records. She played rhythm as well as lead guitar.
Alice also played with Frank Zappa and the Mothers of Invention, Alvin Bishop and recently, Michelle Shocked as well as her own band, Alice Stuart and the Formerly's.
2. What is the name of the first all girl rock and roll band to be signed to a major label?

﻿Filipino guitarist, June Millington, and her sister, Bassist, Jean Millington, fronted the all girl rock band, Fanny. They were signed by Warner Brothers in 1970 and had a top 40 single, "Butter
Boy." Barbara Streisand hired Fanny to play on the "Barbara Joan Streisand" album as well as "Stoney End", and June arranged the hit, "Spaceman. David Crosby named the band, Fanny, formerly "The Sveltes," from Sacramento, CA.
3. Who was the first artist to record an album using only female musicians and technicians?

﻿Alix Dobkin recorded "Lavender Jane Loves Women," with an all female band and tech crew. There was not one male involved in the recording of this album, which was unheard of in the 1960s. Bob Dylan was so impressed with Alix's talent and conviction that he introduced her to his label and they offered her a record deal.

She turned down their proposal and continued to work with only women, becoming one of the founding mothers of Women's Music.
4. Who was the first woman to record a rap song in the United States?

This honor would go to the female rap group Sequence, whose rap single "Funk You Up" was released in 1979 on the Sugar Hill label a year before Blondie's "Rapture." Incidentally, Sequence's members were Gwendolyn Chisholm, Cheryl the Pearl, and Angie B.
5. Which of the following Michigan Women's Music Festival main stage artists got a mainstream record deal from a campfire recording?

﻿Michelle Shocked was shocked to find herself charting on the air in Amsterdam, after a festival campfire recording circulated to cult status. Michelle played at several Women's Music Festivals
in America and is a pioneer of free-verse folk. Michelle sued her record company and won, proving that some record contracts create indentured servitude, thereby violating the amendment that abolished slavery in the United States. Ya gotta LOVE her!
6. ﻿What is the name of the first woman owned, multiple artist record label?

﻿Olivia Records helped to create the genre of "women's music," known in contemporary, popular culture as singer/songwriter or acoustic folk. In the early 70's, Olivia signed Cris Williamson, Tret Fure, and Lucie Blue Tremblay, among many others. Each of the artists maintained a moderate level of notoriety and international visibility as the feminist movement unraveled into mainstream culture.

The label eventually folded as Indie feminist songwriters began to get attention from mainstream record companies.
7. What is the name of the first album released by Olivia Records?


Answer: The Changer and the Changed

Cris Williamson recorded The Changer and the Changed, which became the anthem of the burgeoning women's music movement in the 1970s.
9. Where is the largest Women's Music Festival held?

﻿Although not the first Women's Music Festival (that would be National Women's Music Festival, Bloomington, IN,) Michigan became the most attended, drawing any where from eight to ten thousand women for two weeks of women musicians and mainstream cultural irreverence.
10. Which pioneer of confessional songwriting came out as a lesbian and became a columinist for the national gay and lesbian news magazine, "The Advocate"?

﻿Janis Ian released her first album in the early 70s at the age of fifteen, and experienced rapid notoriety when the controversial single, Society's Child, was banned on syndicated radio because it depicted the doomed romance between a white girl and a black boy. Her top ten hit, "At Seventeen", secured her a lasting place in the archives of impeccable song writing.
Source: Author musettee 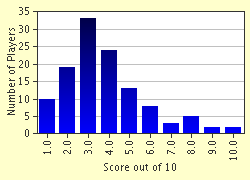 
Other Destinations
Explore Other Quizzes by musettee