My iPod's playing rock music from women who know there's only one way to rock! Bad Sammy Hagar pun aside, this installment focuses on some of the biggest women artists around.

Quiz Answer Key and Fun Facts
1. There's always been a heavy emphasis on sexuality in Madonna's work. The video "Like a Prayer" from 1989 features Madonna in a romantic liaison with what Catholic saint?

Mary Lambert, who also directed the videos to "Borderline", "Like a Virgin", "Material Girl" and "La Isla Bonita", made the video with Madonna in 1989. The video was highly controversial due to burning crosses, the various Catholic references, and Madonna developing stigmata. Martin de Porres could also be interpreted as a black Christ.
2. Britney Spears has become one of the most successful women in the music industry. During one of her video shoots, a camera dropped on her head and she had to have four stitches. What's the video?

Britney Spears' debut album "...Baby One More Time" sold over twenty five million copies and has become the most successful debut by a teenage artist. It's also the most successful debut album as well. "Oops!... I Did It Again", with its constant refrain of "I'm not that innocent" helped broaden Spears' image beyond the teenage bubblegum teenage pop.
3. In 2004, Janet Jackson and Justin Timberlake played the Superbowl Half-Time Show. Due to a so-called "wardrobe malfunction", Timberlake exposed Jackson's breast for nine-sixteenths of a second. During what song did this incident occur?

The Superbowl Half-Time show has proved to be one of the more notorious broadcast events of recent years. At the end of "Rock Your Body", Timberlake finishes the song with the lyric "[I'll] have you naked by the end of this song," which he then rips off a part of Jackson's wardrobe. MTV, who hosted the Half-Time Show, was banned from any involvement with the NFL, and the FCC began to crack down on indecency is broadcasting.
4. What artist has at least eighteen Grammys and even sung at a Presidential inauguration?

Aretha Franklin is one of the most revered women in the music industry. She has a staggering eighteen Grammys, making her among the most honored musicians by that organization. She sang at Barack Obama's inauguration.

She also had two children very early, one at 13 and another at 15.
5. Janis Joplin died October 4, 1970. She had almost completed her album "Pearl", which was released in 1971, four months after her death. What song from "Pearl" was left an instrumental due to Joplin's untimely death?


Answer: Buried Alive in the Blues

Joplin died the day before adding the vocals to "Buried Alive in the Blues" due to a heroin overdose. She reportedly had a brief fling with Jim Morrison of The Doors. Paul A. Rothchild, The Doors' producer for five of their six albums with Morrison, also produced "Pearl".
6. Alanis Morrissette's "Jagged Little Pill" became the biggest selling album of 1995 and one of the strongest international debuts by a woman artist. How many albums had Alanis released previously?

"Jagged Little Pill" was Alanis's international debut. However, she released two albums in Canada before "Jagged Little Pill". These were "Alanis" from 1991 and "Now is the Time" from 1992. They are very different from anything Alanis has recorded since. They are similar to teen bubblegum pop of Debbie Gibbons, Tiffany, and early Britney Spears.

"Jagged Little Pill" is one of only five albums that stayed in the Billboard Top Ten Album charts for over a year. The other albums are "Thriller" by Michael Jackson, "Falling Into You" by Céline Dion, "All the Right Reasons" by Nickelback, and "Fearless" by Taylor Swift.
7. Ann and Nancy Wilson of Heart have proven themselves very successful over the years. What Led Zeppelin song did The Lovemongers, a side project by the sisters, cover for the 1992 movie "Singles"?

Nancy Wilson and Cameron Crowe, the director of "Singles", are married. Ann has also covered "Immigrant Song", which has been available on her website.
8. According to one unauthorized biography, what major computer icon decided to not marry Joan Baez because due to her age they probably would not have children together?

Carole King either wrote or cowrote 118 hits on the Billboard Top 100 between 1955 and 1999. She had an album named "Tapestry" which was on the Billboard Album charts for over six years and held the number one position for fifteen weeks.
10. Joni Mitchel has long been revered as one of the most important female artists of all time. What band incorporated part of her song "Woodstock" into one of their original compositions during their 1973 and 1975 shows?

Due to advice for her manager, Joni Mitchell declined going to play "Woodstock" and instead did "The Dick Cavett Show". She then wrote "Woodstock", which she gave to her then lover Graham Nash. Led Zeppelin used the song during their "Dazed and Confused" segments of their shows in 1973 and 1975.

According to Madonna: ""I was really, really into Joni Mitchell. I knew every word to "Court and Spark"; I worshiped her when I was in high school. "Blue" is amazing. I would have to say of all the women I've heard, she had the most profound effect on me from a lyrical point of view."
Source: Author berenlazarus 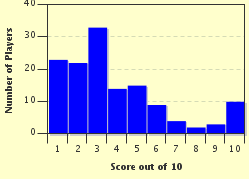