One of the first LPs I ever bought was "Ten on One: The Singles", by Sandra. This started my obsession with female singers, and later rock singers in particular. This quiz contains ten of my favourites- let me know if you agree!

Quiz Answer Key and Fun Facts
1. One fateful day in 1994 I heard a song called "Walk This World" on a radio station and fell in love. The next day I bought the album "Oyster" which contained the track, and loved every minute of it. Which rock vocalist was responsible for the track and album?

Bermudian native Heather Nova launched her debut album "Glow Stars" in 1993, but only starting achieving success with 1994's "Oyster" which reached no. 72 in the UK. Unfortunately this talented lady has not had the commercial success that I believe she should have. Other excellent tracks are "London Rain" and "Maybe an Angel".
2. I never dreamed that a hard rock band would combine well with an operatic soprano, but one fine day as I was browsing music videos, I found a lady singing "The Phantom of the Opera" to screeching guitar riffs. I was in love again. Who was this lady with the powerful voice fronting the metal band "Nightwish"?

Tarja Turunen was born in Finland in 1975. She joined "Nightwish", an acoustic mood band, in 1996. The other band members soon discovered her powerful voice was better suited to symphonic metal and the band reverted to a powerful rock sound.
Unfortunately the band had a very public breakup in 2005, leaving her to pursue a solo career. Among other great songs, "Nemo" and their cover of Gary Moore's "Over the Hills and Far Away" are highlights.
3. The year was 1990. It might not have been love, but I was certainly mesmerised by the bald-headed lady who, while campaigning for a number of issues she believed in, also managed to sing some powerful yet tender songs. Who sang "Nothing Compares 2 U"?

Sinead O'Connor was one of music's most polarising figures in the nineties, bringing out powerful social commentary in her songs, and also publicly standing up for her beliefs. In 1992 she famously tore up a photo of Pope John Paul II in protest against child abuse in the Catholic Church.
She also found time to perform some surprisingly tender songs, an example being a stunning cover of Elton John's "Sacrifice" and "You Made Me the Thief of Your Heart".
4. I was just starting high school in 1988 when I turned on a radio, only to get figuratively punched in the face by a rocking song called "All Fired Up". I also discovered the powerful anthem "We Belong" during my quest to find out more. I was in love for the first time. Who was this powerful rocker?

Born in 1953 to Polish parents in New York, Benatar paid her dues in the '70s before eventually hitting the big time with "Hit Me With Your Best Shot" in 1979. Her 1983 album "Live From Earth" featured the hit "Love is a Battlefield" which went to No. 5 on the US Hot 100.
5. In 1993 I was in my first year at university and discovering lots of music. The campus radio station played a song called "Halah" and I was hooked, two hours later I had bought two albums by a band called Mazzy Star. Who was the lady with the beautiful voice doing lead vocals?

Mazzy Star was an alternative rock band from California, with guitarist David Roback and singer Hope Sandoval. Sandoval's calming vocals are the main attraction for me, with their biggest hit coming off the album "She Hangs Brightly" in 1990, called "Fade Into You". Also give a listen to "Blue Flower".
6. In 1995 my little brother bought a CD by a little known band called Garbage. One listen to "Only Happy When It Rains" and I was, once again, in love. Who was the Scottish vocalist who won my heart that day?

Shirley Manson is a Scottish singer who has performed with a variety of bands including Angelfish, but her biggest success has been as the face of Garbage. Their biggest success came in 1995 with the release of "Garbage", which included the hits "Only Happy When It Rains", "Milk" and "Stupid Girl". Personally, I love those songs but am partial to "When I Grow Up".
Garbage also managed to record "The World Is Not Enough" for the Bond film of the same name.
7. The mid-1990's was a great time for female vocalists, as I discovered near the end of my studies. The song was called "Brazen (Weep)" and I was dumbstruck. Who was the singer of Skunk Anansie, whose album "Stoosh" I bought that same day?

Skunk Anansie was formed in 1994 in England. Their lead singer Skin (born Deborah Ann Dyer)spent most of her career with the band, but has also released two solo albums. Her powerful voice is perfectly suited to Skunk Anansie's alternative hard rock sound. Listen to "Hedonism" or "Secretly" if you are not convinced...
8. I discovered this amazing vocalist way too late, during the later part of her career. The song was "Seven Wonders" and the band was Fleetwood Mac. This might be tricky, but which of the band's two female singers is my favourite? Hint: She also sings "Stop Draggin' My Heart Around" with Tom Petty.

Stevie Nicks has one of the ultimate voices to me- powerful and extremely emotional. Born in 1948 in Phoenix, Arizona, she joined Fleetwood Mac in 1974.Along with Christine McVie they alternated as vocalists for the band, and while both are great singers I rate Stevie much higher- I get chills every time I play "Rhiannon" or "Landslide".
9. I discovered my newest favourite when her band slammed the charts in 2003 with a song called "Bring Me To Life". I fell over my feet to get the album "Fallen" by Evanescence, and guess what? I was in love again! What was the name of their lead singer?

Born in 1981 in California, Amy Lee has an incredibly powerful and unique voice. Her major breakthrough came as part of Evanescence, the album "Fallen" producing hits like "Going Under" and "Everybody's Fool", but her vocals really shine on power ballads like "My Immortal" and "Good Enough".
Another great performance is her duet with Seether's Shaun Morgan on "Broken".
10. So who is my ultimate female rock vocalist? I discovered her way after her band's heyday when they had huge hit in 1990 with "All I Wanna Do Is Make Love To You", but I went back and rediscovered the magic of Heart. Who is their iconic lead singer?

Heart was formed in 1973 after using the names The Army and Hocus Pocus previously. Ann Wilson and her sister Nancy has been a constant throughout many lineup changes, and as of 2013 they are still performing. My historical trip led me to incredible vocal performances like "Alone" and "Barracuda".
My number one: Ann Wilson.
Source: Author strudi74 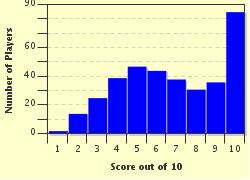 
Other Destinations
Explore Other Quizzes by strudi74