Time to dig out the old Dylan LP covers from the closet.

Quiz Answer Key and Fun Facts
1. On the 'Dylan and the Dead' cover, what is between Dylan and the Grateful Dead Skull and Roses symbol?

2. On the 'Bringing It All Back Home' cover, what is Dylan holding?

A white cat, to be exact.
3. On the 'Knocked Out Loaded' cover, what is the man in the sombrero doing?

4. The covers of 'Unplugged,' 'Down in the Groove,' 'Bob Dylan,' and 'Nashville Skyline' all have one thing in common. What is it?


Answer: Dylan is holding a guitar

5. On the 'Bringing It All Back Home Cover,' what is the lady in the red dress holding in one hand?

6. 'The Bootleg Series,' 'Blood On the Tracks,' 'Infidels,' 'Under the Red Sky,'--on which of these is Dylan not wearing sunglasses?


Answer: Under the Red Sky

You'd think, what with a 'red sky' and all . . .
7. It is extremely rare when Dylan smiles for an album cover. Which of these albums features Bob smiling?

8. On the 'Slow Train Coming' album cover, what is the man in the foreground holding in his hands?

The pick is drawn to look like a cross.
9. On 'The Basement Tapes' cover, which member of The Band is holding an accordion?

Normally, Garth Hudson is the accordion player in The Band.
10. What is the predominant color of Dylan's paisley jacket on the 'Highway 61 Revisited' album?

Done by Milton Glaser.
12. On the 'Biograph' cover, there are two of the same object featured, one blue and one yellow. What are these objects?

13. 'Infidels,' 'Down in the Groove,' 'Live At Budokan,' 'New Morning'--on which album cover does Dylan not have a beard?


Answer: Down in the Groove

14. Which of these early Dylan albums does not have the songs listed on the front cover?


Answer: Bringing It All Back Home

Listing songs on the front cover and the bottom of the back cover was typical of Columbia Records releases of the time.
15. Which album cover features Dylan wearing a scarf around his neck?

A black and white checkered scarf, to be exact.
Source: Author stooben 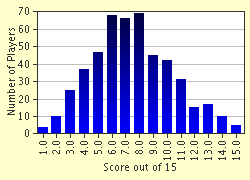 
Other Destinations
Explore Other Quizzes by stooben