Elvis Is In The Building Trivia Quiz

Think you know all there is about Elvis? Put on your "Blue Suede Shoes", and reflect on the "Memories" of the one and only Elvis.

The trio encountered tremendous success in country and western clubs across the south and southwest. Many owners of the clubs they played considered the boys too wild. Reception from radio stations wasn't too favorable either. Blues stations thought the act was too country for their listeners. Country stations felt the boys were too bluesy.
2. Folklore would have you believe Elvis went into the Tupelo Hardware Store on his 11th birthday wanting a guitar. This isn't the full story. Young Elvis had quite another idea in mind for his chosen birthday present. Which one of these toys is often said to be the one he wanted?

Though the shop was filled with various types of general merchandise perfect for a birthday gift. Young Elvis had his mind set and put up quite a fuss in trying to convince his mother to get the bicycle. But protective Gladys won out and talked him into the guitar instead.

The story is sometimes told with a .22 rifle instead of a bicycle.
3. Sunshine Records is the name of the infamous recording studio where Elvis cut his first record.

Elvis stopped at Sun Records to record two Ink Spots songs, "My Happiness" and "That's When Your Heartaches Begin."
4. What year did Elvis' good humor and sportsmanship get put to the test on the Steve Allen Show? This was the one where he was dressed in a tuxedo and sang "Hound Dog" to a sleepy-eyed basset hound named Sherlock?

Elvis fans went along with it, delighted to see him. But many were upset, believing that Allen had made Elvis look foolish. In later years Elvis himself expressed annoyance and regret over the whole episode.
5. On November 20, 1955, RCA Records bought out Elvis' contract with Sam Phillips of Sun Records and thus began the unstopable force that changed music forever. How much money was the contract purchased for?

This was one of the greatest muscial bargains history! Included in the deal was all of Elvis' released Sun material, plus five unreleased tracks as well.
6. The movie, "Jailhouse Rock" was released in 1957. Also in the movie were Judy Tyler, and Dean Jones. It was Elvis' third movie. What was the name of the character Elvis played?

Filmed in black and white, "Jailhouse Rock" premiered on October 17, 1957 in Memphis. Total gross for the film exceeded $4,000,000, making it one of the top-grossing films of that year.
7. This 1964 release was filmed at Big Bear Lake, California and featured such co-stars as Yvonne Craig, Pamela Austin, and Maureen Reagan, daughter of future-president Ronald Reagan. What was the name of this film which Elvis played opposite of... ELVIS?

Elvis was born with blondish/ brown hair. He had been inspired by the jet black hair of Tony Curtis and decided to color it. In "Kissin' Cousins", Elvis played distant cousins- one with dark hair. The other a blond. Elvis had a lot of fun switching back and forth between the two characters.
8. On December 4, 1956 Sun engineers recorded the impromptu vocalizations of Elvis, along with Johnny Cash, Roy Orbison and Jerry Lee Lewis. They called the group as a whole, The Million Dollar Quartet.

Carl Perkins, not Roy Orbison, had been doing some recording that day for Sun Records in Memphis. The piano player for the session was Jerry Lee Lewis. Watching at Carl's request from the control room was Johnny Cash. As was customary for Elvis those days, he dropped in to say hello. The performance was recorded and together they were indeed the Million Dollar Quartet.
9. What would have been the name of Elvis' twin brother?

Elvis was born at 4:35 a.m. on Tuesday January 8, 1935, A twin brother, Jesse Garon was stillborn, and buried the next day in Priceville Cemetery.
10. December 3, 1968, Colonel Parker wanted the final song of Elvis' triumphant 68' Come-back Special to be a traditional Christmas Carol. Producer Steve Binder thought otherwise and asked for an original song to be written for the closing number. What was the name of this powerful song?


Answer: If I Can Dream

The dramatic and heart-felt "If I Can Dream," was an anthem about brotherhood commissioned during the very turbulent times at hand. 1968 had seen the assassinations of both Martin Luther King and Robert Kennedy. Choral director W. Earl Brown wrote the number, and after listening a dozen times or so, Elvis announced, "I'll do it."
It became his biggest hit in five years.
Source: Author bunnybing 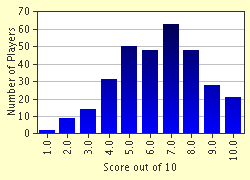 
Other Destinations
Explore Other Quizzes by bunnybing