If you are a major AC/DC fan, this should be a cinch for you.

Quiz Answer Key and Fun Facts
1. What was the location of Bon Scott's death?

Bon Scott died after drinking 7 doubleshot whiskeys at the Music Machine in Camden town; sadly he was found dead in the back of a friend's car.
2. What is the name of Angus' wife?

The name of Angus' wife is Ellen.
3. Do Malcolm and Angus have a sister named Margaret?

This is true. Margaret suggested that Angus wear his school uniform on stage.
4. When is Angus Young's birthday?

Angus was born March 31st 1955, but a magazine published that he was born in 1959 to make him look younger and fit the schoolboy image.
5. On what album did Phil Rudd return after his long absence from the band?

After the leaving the band in 1983 due to some personal problems, Phil Rudd quietly joined the band for the making of "Ballbreaker".
6. Do Angus and Malcolm have dinosaur fossils named after them?

One species was named for Malcolm (Maldybulakia malcolmi) and one species was named for Angus (Maldybulakia angusi). "Malcolmi" was deposited in (possibly lived in?) a lake that ponded in volcanic terrain in southern New South Wales 383 million years ago. "Angusi" got deposited in floodplain sand in a river system not far from Canberra about 414 million years ago.
7. Does the the band Green Day have an album called "Dookie" featuring a small picture of Angus?

If you look closely at the cover of Green Day's "Dookie" album, you can see a picture of AC/DC's Angus Young. (Look at the the guitarist standing on the roof of the building on the bottom right hand corner)
8. Is the song "Let's Get It Up" featured on the "Back in Black" album?

The song "Let's Get It Up" is on the "For Those About To Rock" album.
9. What songs did singer Brian Johnson perform while trying out for the band?

Brian sang "Nutbrush City Limits" and "Whole Lotta Rosie" at his audition for AC/DC. Malcolm states he was relieved that he did not suggest "Smoke on the Water" as many other people trying out did.
10. (This is just a funny question) Which one wears the AC/DC shirt? Beavis or Butthead?

If you watch the show, Butthead wears an AC/DC shirt, and at times you'll catch them singing an AC/DC tune.
Source: Author acdcrocksall 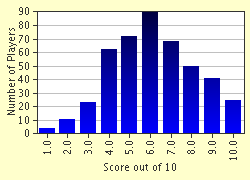 
Other Destinations
Explore Other Quizzes by acdcrocksall