Match the lyrics to the correct song.

Quiz Answer Key and Fun Facts
1. What song, written by June Carter-Cash, are these lyrics from "The taste of love is sweet, when hearts like ours meet"

"Ring of Fire" was recorded on March 25, 1963. It quickly became the biggest hit of Johnny Cash's career, staying at #1 on the charts for seven weeks.
2. The line "You stay a little while and then you're gone again", is from which classic song?

"Cry, Cry, Cry", released in 1955, was Cash's first recording that found an audience. It ended up reaching number 6 in the country charts.
3. "He stopped once to wipe the sweat away" was a line from which popular song?

"Get Rhythm" was Cash's first number one single on the country charts. It is a song about optimism, centering on a shoeshine boy who "gets rhythm" to cope with the uninteresting nature of his job.
4. The lyrics "That I'd search the honky-tonks and bars" are from which Johnny Cash song?

Johnny Cash was at the height of his popularity when he recorded this song live at San Quentin State Prison in California. The concert was recorded for broadcast for Granada Studios on February 24, 1969. The song quickly shot to number 2 in the pop charts and number 1 in the country charts.
5. "You're the dirty hack that shot your woman down" is a line from which famous song?

"Cocaine Blues" is one of the songs Johnny Cash performed at the Folsom Prison concert.
6. Which Johnny Cash song is this line from? "This old train is puffing smoke"

"Hey Porter" was written by Johnny Cash on the way home from a four year stint in the United States Air Force. It was recorded in September 1954 and released as a single a year after in July.
7. The line "To gather flowers constantly and to come each time you call" is from which classic song?


Answer: It Ain't Me Babe

"It Ain't Me Babe" Was originally written and recorded by popular Country/Rock artist, Bob Dylan. Dylan and Cash admired each others work and with Dylan's blessing, Cash recorded the song with June Carter.
8. "I wear this crown of thorns upon my liar's chair" is a line from which song?

"Hurt" was written by Trent Reznor and first released on Nine Inch Nails 1994 album "The Downward Spiral". In 2002 Johnny Cash covered the song and it became one of his final releases before his death in 2003.
9. "Where the rain never falls the sun never shines" is from which Johnny Cash song?


Answer: Dark As A Dungeon

"Dark as a Dungeon" is a song written by singer-songwriter Merle Travis. The song received much of its fame when it was performed at Johnny Cash's Folsom Prison concert. Dolly Parton also covered this song in 1981.
10. Which song is the line "I need a friend" from?


Answer: Help Me Make It Through The Night

"Help Me Make It Through the Night" is a country music ballad composed by Kris Kristofferson and released in 1970. It was covered by artists such as Sammi Smith and Gladys Knight and the Pips before Johnny Cash and June Carter eventually covered it. It was featured on the 2006 on the album "Duets", a compilation album released by Sony BMG.
Source: Author Elli06 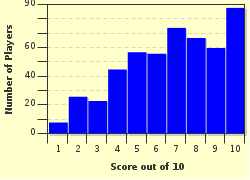 
Other Destinations
Explore Other Quizzes by Elli06