Because You're Mine, I Walk The Line Quiz

This is a quiz about one of the greatest singers of all time: Johnny Cash.

Johnny Cash was born on February 26, 1932 in Kingsland, Arkansas. He was the son of Ray and Carrie Cash. He grew up in Dyess, Arkansas.
His brother Tommy Cash was also a rather successful country singer.
2. What was Johnny Cash also known as?


Answer: The Man in Black

Johnny Cash was also known as "The Man in Black". "Man In Black" was the title of one of Cash's successful albums which was released by Columbia Records. Most of the songs on this album have political references. The album also included a song with the same name: "Man In Black", which was about Johnny Cash himself.
3. What was the name of his country singer wife?

June Carter Cash married Johnny Cash in 1968. She was his second wife and was also a very successful singer and songwriter. She was born Valerie June Carter June 23rd, 1929 in Maces Springs in Virginia. She started performing at the tender age of ten and she played the guitar, banjo and autoharp as well.
4. How did Johnny Cash traditionally start his concerts?

Johnny Cash started his concerts with this very simple introduction "Hello, I'm Johnny Cash". This title is also the name of an album released by Johnny in 1970. This album included the very successful duet with his wife June Carter Cash named "If I Were a Carpenter" which won the Grammy award for "Best Country Performance by a Duo or Group with Vocal".

The song was also Number two on the Country music charts.
5. Johnny Cash was first portrayed in a short film, in 1999. What was the name of this film?


Answer: I Still Miss Someone

The short film "I Still Miss Someone" starred Mark Collie and was directed by John Lloyd Miller and was released in 1999. It won four awards including Best Short Film in the Atlantic City Film Festival.
This film captures Johnny popping pills and taking a trip down memory lane as a reporter interviews him; he even speaks with his dead brother.
6. From 1969 to 1971, Cash starred in his own TV show called "The Johnny Cash Show". On which network was the show in the US?

"The Johnny Cash Show" starring Johnny Cash, was a television music variety show. The show was aired from 1969 to 1971 on ABC (for 58 episodes). Johnny Cash always opened the show and the show usually included Johnny's wife, June Carter Cash, the Carter family and others like the the Tennessee Three.
It was first aired as a one hour long show as a replacement for "The Hollywood Palace" show. It was recorded in Nashville at Ryman Auditorium.
On September 18th 2007, a DVD featuring 66 live performances from "The Johnny Cash Show" was released.
7. Which of the words below completes this lyric : "I keep the ends out for the tie that -----/Because you're mine I walk the line"?

This is a lyric from Johnny Cash's famous song, "I Walk The Line". The song was written by Johnny himself and was recorded in 1956. It was released on May 1st 1956 and was 2:45 minutes long.
8. How many children and stepchildren did Cash have?

He was diagnosed with Shy-Drager disease although the diagnosis was later changed to Autonomic Neuropathy and Diabetes. In 1998 he was hospitalized due to pneumonia which seriously damaged his lungs.
10. And finally, when did Johnny Cash die?

He died in 2003 at the age of 71, about five months after the death of June Carter Cash. She died on May 15th 2003 at the age of seventy three. He was buried next to his wife in Hendersonville Memory Gardens.
May he rest in peace...
Source: Author katy_sh 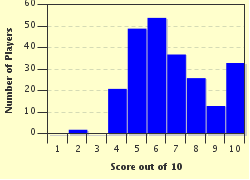 
Other Destinations
Explore Other Quizzes by katy_sh