Do you know which KISS song have been played live? In the 70s, 80s, 90s, and the new millenium? Test your knowledge here.

Quiz Answer Key and Fun Facts
1. Which of these songs was only been played live three times in the 1970s?

"Mainline" was played live once, according to KISSFAQ, although I've never seen a bootleg anywhere that has that song. "Ladies in Waiting" was performed live only. "Mr. Speed' has never been completely played live, although parts of hit have been played on the "Unplugged" tour and in 2001 in Australia.
2. Two of KISS' biggest hits have been performed live many times, but were not performed on their albums' respective tours. Which songs are they?

"Beth" wasn't played on the "Destroyer" tour because it wasn't a hit before then. In fact, Gene and Paul didn't even want the song on the album, let alone did they want the song played live! When it became a hit, there was no way they couldn't play it live, so for the rest of Peter's days in the band, they played it near the end of the concert. The rest of the band would leave the stage while Peter would sit in his stool and sing the song with a taped orchestra in the background.

Likewise, "Calling Dr. Love" wasn't a hit single until after the "Rock And Roll Over" tour and therefore wasn't played. When they added it to the setlist on the "Love Gun" tour, they realized that it was the best live song on the album!
3. There was a video released for this song, and it was rehearsed for the "Rock And Roll Over" tour, but hardly ever played on that tour. Which song is it?

No, believe it or not, "Sure Know Something" was not played on the "Dynasty" tour. The first time it was played live was the "Unplugged" tour.
5. Which song from the "Lick it Up" album was played on every tour until Eric Carr died?

It's one of the best live songs of their career. The live version blows away the studio version. "Young And Wasted" was played live on the "Animalize" tour with Eric Carr on vocals, but was dropped after that tour for some reason. The other two songs were not played at all after the "Lick it Up" tour.
6. When "Thrills in the Night" became a hit on MTV, it was added to the setlist in the second half on the "Animalize" tour. Which song was taken out of the setlist to make room?


Answer: I've Had Enough (Into The Fire)

Strangely, it was "I've Had Enough," my favorite song on "Animalize" along with "Heaven's On Fire." I personally think "Under The Gun" was a more expendable song, but that song was played on every show of the "Animalize" tour and even a few shows beyond. The other two songs were only played once; and that was in England.
7. Which song was NOT played on the "Asylum" tour?


Answer: Who Wants to Be Lonely

Amazingly, even though there was a video for this song, it was not played live at all on the "Asylum" tour. "King of the Mountain" and "Any Way You slice it" were only played a few times, but they were played more often than "Who Wants to be Lonely." I really do not understand why.
8. What's the only Gene song on the albums "Animalize" through "Hot in The Shade" that was played live on just about every show of it's respective album's tour?


Answer: No No No

"Betrayed" was only played live twice and even though "While the City Sleeps" was released as a top 100 single in some countries, it was not played at all.
9. Which of these songs was played on the "Psycho Circus" tour?

I think it's mind-boggling that "Within" was played ahead of the other three songs, as it doesn't sound like a song that would sound good live. "We Are One" and "You Wanted the Best" were both released as singles, and "Raise Your Glasses" sounds like it would be a great live song, but those songs weren't played live. I find it especially mystifying that "You Wanted The Best" wasn't played live as it's the only song that features all four members of the band on vocals. Just imagine what it would sound like live!

But all four members of the band agreed to play "Within" live, and it sounded very good at most shows and got a surprising amount of applause.
10. What's the only KISS album that did not have an ensuing tour or TV appearance to support it?

There was no tour in support of "Music From The Elder" either, but there was one show called the Fridays show that KISS appeared on. On that show, they played "The Oath," "A World Without Heroes" and "I."

There was a tour for the "Unmasked" album. Even though they didn't tour in the U.S. for that album, they did tour in Australia and Europe, and it was one of their most successful tours ever. The first three songs on the album were all played live.

And, yes, there was a tour for "Hot in the Shade," where "Rise to It," "Hide Your Heart" and "Forever" were regularly played.
Thank you for taking this quiz.
Source: Author DrLoveGun 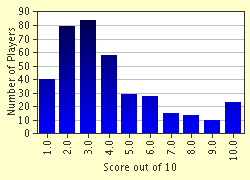