I've recently rediscovered KISS, so have decided to make a quiz on their song titles, and other stuff...


Answer: Was Made For Loving You

Gene Simmons likes cake...
KISS were asked to take off their make-up as the record label didn't like it, but they decided to keep it, and now are known for the make up.
2. Is there a KISS song called "Wild In The Wind?"

This is actually a Bon Jovi song. It hails from the album "New Jersey."
3. Which KISS song has the following lyric "Put It In The Soul Of Everyone"?


Answer: God Gave Rock And Roll To You

A cover of Argents 1973 song, it has also been covered by Petra. The song was used in the film "Bill And Ted's Bogus Journey."
4. Which of the following is the title of a KISS album?

"Black Diamond" is a song by Kiss credited to Paul Stanley, even though it is said that it was co-written with Gene Simmons. It is the last song on the debut album.
6. Who is became the drummer for KISS in the early 1990s after the then drummer's death?

In 1991, Eric Singer auditioned for Kiss, after the tragic death of their previous drummer, Eric Carr. He has also worked with Alice Cooper.
7. Complete this lyric, from "Deuce": "Old Jim is .... hard this year."

"Deuce", in addition to being one of the band's most popular and most-covered songs, is a traditional concert opener. According to Gene, he copied the bassline from the Rolling Stones, and played it backwards.
8. Who in the band KISS is also known as "The Demon?"

In 2007, he appeared alongside other celebrities, as well as regular people, in the music video for "Rockstar" by Nickelback.
9. What is Paul Stanley's birth name?

Stanley Bert Eisen was born January 20, 1952, Queens, New York. He is better known by his stage name Paul Stanley, and is the rhythm guitarist in KISS.
10. Which member of KISS was born on the 25th August 1949?

Gene Simmons was born Chaim Witz in Haifa Israel. He emigrated to the US in 1957, and co-founded KISS, with Paul Stanley, Ace Frehley, and Peter Criss in 1972.
Source: Author clarod 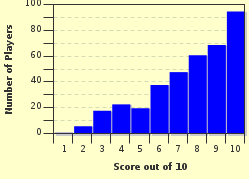 
Other Destinations
Explore Other Quizzes by clarod