I'll give you a description of a Kiss song and you just figure out what song it is. Good Luck.

Quiz Answer Key and Fun Facts
1. Play Music During All Hours Of The Evening


Answer: Rock and Roll All Nite

"Rock and Roll All Nite" was from Kiss's 1975 album "Dressed To Kill". It also appeared on their 1975 live album, "Kiss Alive". "Rock And Roll All Nite", which is considered the band's signature song, was often played last at their concerts during the group's encores.
2. Hapless Lady

"Calling Dr. Love" was from Kiss's 1976 album, "Rock And Roll Over". Bassist Gene Simmons got the idea for the song from a Three Stooges episode where the trio snuck in a hospital as posed as doctors.
4. Amore Firearm

"Love Gun" was the title track from Kiss's 1977 album. Guitarist Paul Stanley wrote the song while on a plane to Japan.
5. Yell It Out Noisily


Answer: Shout It Out Loud

"Shout It Out Loud' was from Kiss's 1976 album, "Destroyer". It was one of the group's most played songs, as they performed it in every one of their concerts.
6. I Was Born For Giving You Affection


Answer: I Was Made For Lovin You

"I Was Made For Lovin' You" was from Kiss's 1979 album, "Dynasty". Paul Stanley wrote the song so the group could evolve into the ever popular disco of that era. Songwriter Desmond Child also helped with the song.
7. Dark Colored Pearl

"Black Diamond" was included on the band's debut, self-titled album, released in 1974, as well as their 1975 live album, "Alive". The song started with an opening acoustic riff before blending into a fast, hard rocker. It was also a well known closer at the band's concerts.
8. Idol Of Lightning

"God Of Thunder" was included on Kiss's 1976 album, "Destroyer". Although he song was written by Paul Stanley, Producer Bob Ezrin gave it to Gene Simmons to handle the vocals. Also, Ezrin's kids are heard in the background to add eerie noises and sound effects.
9. Blazing Time Of Being Young

"Ladies Room" was from Kiss's "Rock And Roll Over" album.
Source: Author diamondjim68 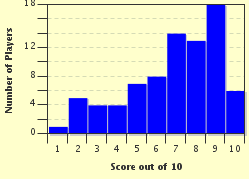