Random questions about KISS. Some are easy, some are tough.

Quiz Answer Key and Fun Facts
1. Which member of the band historically has a reality TV show known as "Family Jewels?"

The first episode of "Gene Simmons' Family Jewels" was shown in August of 2006.
2. Which Kiss member speaks most often in in the "Rock The Nation!" DVD?

Excluding Gene's chants of "oh yeah!" before "Unholy" and his usual shout of "I wanna hear you" before "Deuce," Paul does the talking.
3. What Led Zeppelin song did they cover a couple of times on the "Crazy Nights" tour?

"Forever" is KISS' only top ten single of the 80s.
5. When Bruce Kulick's band came to Australia in 2004, they played a "Revenge" medley. Which of these songs was not part of that medley?

This medley can be listened to on YouTube.
6. Which of these songs was not a top 10 single in any country?

The highest chart position the live version of "Rock And Roll All Night" ever climbed to was number 12.
7. What was the biggest hit on the "Love Gun" album?

Yup, "Dirty Livin'" was released as a single, although it only charted in Germany. "Christine Sixteen" peaked at number 46 in Germany, "Talk to Me" at number 32, and "I" at number 62.
9. Which song was a number one hit in three different countries?


Answer: I Was Made For Lovin' You

Some sources say that "Kissin' Time" was the first single, but in actuality the first A-side was "Nothin' To Lose" and the first B-side was "Love Theme From KISS"
Source: Author DrLoveGun 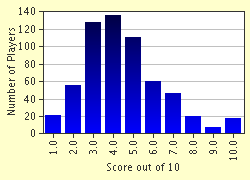