This is a quiz on the late great Eric Carr.

Eric's original name was Paul Charles Caravello. He was born in Brooklyn, New York.
2. When did Eric Carr audition for KISS?

Eric was introduced on the TV show "Kids Are People Too", filmed in late July 1980, but didn't air until September 1980.
3. What was Eric Carr's original stage name?

He insisted on Rusty Blade, but changed it to Eric Carr which he thought was better. He got Eric from a name one of his old girlfriends nicknames used to call him, and Carr was from his real last name Caravello.
4. What was Eric Carr's original KISS stage persona?

The first was The Hawk. Very unsatisfied, he created The Fox which better fit his personality.
5. When was Eric Carr born?

He was born to Albert and Connie Caravello.
6. What was a band Eric was in before KISS?

Eric was in the band The Cellarmen and played drums and provided lead vocals.
7. What was Eric Carr's first album with KISS?


Answer: Music From the Elder

"Music From The Elder" was meant to be a movie but was never made into one. "The Elder" was also KISS's only concept album.
8. What was Eric Carr's distinguishable KISS color?

His color was rust. He was going to have the stage name of Rusty Blade but later changed it to Eric Carr.
9. What was the name of Eric Carr's solo album?

Bruce Kulick produced "Rockology" and released it in 1999.
10. Who did Eric Carr replace in KISS?

Caravello was working for his father as an oven repair man for Jamaica Stove in Brooklyn. He was playing drums in a band named Flasher when Kiss dismissed Peter Criss.
Source: Author EricCarrRulez 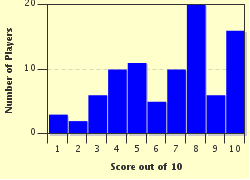 
Other Destinations
Explore Other Quizzes by EricCarrRulez