Sting and his Music Trivia Quiz

This quiz is about Sting and his post-Police music. I hope you enjoy it!

Sting was born Gordon Sumner in Wallsend, England, in 1952. He is said to have acquired the nickname Sting in honour of a striped sweater he wore.
2. Sting's song "Desert Rose" is a favourite of mine. An Arabic singer joins him on this recording. Choose the correct statement from the following list. True. It's a man. True. It's a woman. Untrue. This is a solo. Untrue. Sting wrote the song. He doesn't perform it.

Sting sings "Desert Rose" in duet with a young Algerian singer named Cheb Mami. Despite Mami's high voice, he is male.
3. Sting married second wife Trudie Styler in 1992. Who was his first wife?

Sting married actress Frances Tomelty in the 1970s, and they have a son and daughter.
4. Joseph Sumner, Sting's son, fronts a band. What is it called?

Fiction Plane is the name of the band. Its debut album was "Everything Will Never Be OK", in 2003. Joe is Sting's eldest son, whose mother is Frances Tomelty.
5. Sting's song "Perfect Love Gone Wrong" is narrated by which kind of character?

"Perfect Love Gone Wrong", from the "Brand New Day" album, is narrated by a dog, who is majorly annoyed because his (female) owner has found a human boyfriend!
6. One of Sting's songs, "Fields of Gold" was recorded by another singer. Who was s/he and what was the name of the album?

Eva Cassidy sang this beautiful song on her album, "Songbird". Eva was born in Washington DC in 1963 and died in 1996. Joe Sumner is Sting's son, also a singer, but the song doesn't appear on the album named. Nor has Peter Gabriel recorded it. Trudie Styler, Sting's second wife, has never recorded an album called "Duet".
7. Sting has sometimes worked as an actor. In the black comedy movie "Lock, Stock and Two Smoking Barrels", he played JD, the father of Eddy, one of the main characters. What was his character's profession?


Answer: He owned a bar.

Sting played the bartender in the movie, which was directed by Guy Ritchie and produced by Trudie Styler. He was reluctant to hand over his bar to clear Eddy's gambling debt. Other movies Sting has appeared in have been "Dune", "The Adventures of Baron Munchausen" and "Brimstone and Treacle".
8. Sting has written his autobiography. What is the title of the book?

"Midnight Dream" is not one of Sting's. It is sung by Neil Diamond on the album "Three Chord Opera". "Desert Rose" and "A Thousand Years" are both Sting solo songs, and "Roxanne" was a hit during his days with the Police.
10. Singer, songwriter, author, activist, actor - Sting has his finger in a lot of pies. His first and second wives are both actresses, and at least one of his kids is a singer. Which job did his father do when Sting was a boy?


Answer: He was a milkman. 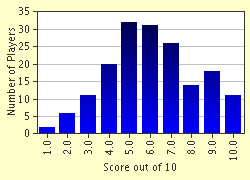