The Quiz Of AC/DC

A quiz on my favorite band of all time.

Share on Facebook
Share on Twitter
Share by E-Mail
Author
iloveacdc
Time
3 mins
Type
Multiple Choice
Quiz #
126,359
Updated
Dec 03 21
# Qns
10
Difficulty
Average
Avg Score
6 / 10
Plays
3087
This quiz has 2 formats: you can play it as a or as shown below.
Scroll down to the bottom for the answer key.

Quiz Answer Key and Fun Facts
1. On what date did Bon Scott die?

He choked to death on his own vomit.
2. On which of these albums can you NOT find the song "You Shook Me All Night Long"?

This was one of the band's most successful and famous songs.
3. What was the band's first album?

There are two versions of this album, American and Australian.
4. The song "Big Gun" is on the soundtrack to which movie?

Arnold makes an appearance in the video for the song dressed like Angus, in full schoolboy uniform!
5. AC/DC performed in front of 1 million people on an airstrip in what country?

President Boris Yeltsin invited them there.
6. Which of these songs is not on the "If You Want Blood" album?

The song "If You Want Blood" isn't on the album either.
7. Which of these albums (American release) do NOT feature Angus on the cover?

He doesn't appear on "Back In Black", "For Those About To Rock", "Fly On The Wall", and "The Razors Edge" either.
8. Bon dressed up as a girl once in a video.

It's the video for "Baby Please Don't Go".
9. What were the first two songs AC/DC recorded?


Answer: Can I Sit Next To You Girl and Rockin' In The Parlor

These are the only songs Dave Evans recorded with the band.
10. Where was the "Stiff Upper Lip" DVD recorded?

At the Olympic Stadium in Munich.
Source: Author iloveacdc

This quiz was reviewed by FunTrivia editor Dalgleish before going online.
Any errors found in FunTrivia content are routinely corrected through our feedback system.
Most Recent Scores
Jan 16 2023 : Guest 172: 9/10
Jan 12 2023 : Guest 71: 2/10 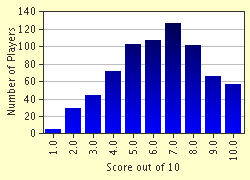 
Other Destinations
Explore Other Quizzes by iloveacdc