Some famous Georges. Do you know who they are, based on my description?

Quiz Answer Key and Fun Facts
1. Two myths about our first George are that he had wooden teeth and he chopped down his father's cherry tree.

Of course, the first U.S. president is famous for many things, like being the first U.S. president. He was also a general in the American War of Independence, gave his name to the nation's capital and one of its states.
About those wooden teeth: although that rumor has survived for more than 200 years Washington's teeth were not wooden, although he did have a pair made of hippopotamus ivory.
The cherry tree is myth too, nothing more than a fable on the virtues of honesty.
2. This fictional George gets into plenty of monkey business. Although he grew up in the jungle, he now lives in an apartment with his friend, a man who always wears a yellow hat.

Curious George is the lovable little monkey created by H.A. Rey. His friend is never identified by name; only as "the man in the yellow hat". George's antics are told in several wonderful children's books.
3. This George played his entire career with the Kansas City Royals. In 1980 he batted .390, the highest season average since Ted Williams.

George Brett is a first-ballot Hall-of-Famer. In 1985 he led the Royals to the World Series over the St. Louis Cardinals. He is also known for charging an umpire after having a home run discounted in the infamous "Pine Tar Incident".
4. This George played guitar in The Travelling Willburys. He also played in a slightly more famous band called The Beatles.

Sadly, George Harrison died November 9, 2001. He was inducted posthumously into the Rock and Roll Hall of Fame in 2004. His first guitar sold at auction of more than $469,000.
5. This George gave us the Star Wars saga.

George Lucas also runs Industrial Light & Magic (ILM), one of the premier special effects outfits in the world. In his early career, he directed the film classic, "American Graffiti".
6. One of the top comedians and satirists of the 20th and early 21st centuries, this George authored the book "Brain Droppings", and starred in the movies "Bill and Ted's Excellent Adventure" and "Dogma".

Although he is famous for his often raw perspective, even children will recognize George Carlin as the friendly narrator of the "Thomas The Tank Engine & Friends" TV show.
7. This George coined the phrase "Big Brother" in a novel about an intrusive, authoritarian government.

George Orwell wrote the frightening novel "Nineteen Eighty-Four" about a world in which the human individual is a drone for the all-powerful state. He was also the author of "Animal Farm" and several political essays.
8. This TV character was Jerry's best friend on "Seinfeld".

Jason Alexander, the actor who plays George is also an accomplished theater veteran. He has even won a Tony Award for Best Performance by an Actor in a Musical for his performance in "Broadway".
9. This royal George was King of England when the American colonies won their independence.

George III ruled for sixty years beginning in 1760. Besides losing the American colonies, he was known for experiencing periods of insanity. However, his reign wasn't all negative. He also founded and financed the Royal Academy of Arts which is still going today.
10. This father and his son were both presidents of the United States. Luckily for this quiz, they share the name George.

Not only were they both presidents, but they both led the U.S. into war in the same country, Iraq.
Source: Author poppersmoke 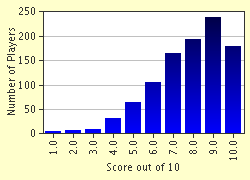 
Other Destinations
Explore Other Quizzes by poppersmoke