I've been having some wild dreams lately in which I am transformed into Bible characters. I'll share them with you and you can tell me who I've become in each of my dreams. (King James Bible used)

Quiz Answer Key and Fun Facts
1. In my first dream, I seemed to have a son called Jabal. My husband, Lamech, told me that he had slain a man to his wounding and a young man to his hurt. He said that if Cain was to be avenged sevenfold then he would be avenged seventy fold. I trembled for him. Which Bible character was I transformed into?

Adah was the wife of Lamech, according to Genesis 4:19. His other wife was Zillah. Adah's two sons were Jabal and Jubal. Lamech was the first polygamist and the second murderer named in the Bible. (Genesis 4:20-24)
2. Oh! This is a horrible dream. I've been taken from my husband to a Pharaoh's house. The Pharaoh wants to have me for himself, but plagues are falling on his house because of me. Who have I become in this dream?

According to Genesis 12:10-20, Abram went to Egypt to live because there was a great famine in the land. He told Sarai that because she was beautiful the Egyptians would want to kill him and take her if they knew she was his wife. He told her to say that she was his sister so that he would not be killed. When the prices of Pharaoh saw her they took her to Pharaoh's house and Pharaoh entreated Abram well for her.

When God sent plagues on Pharaoh's house, he sent for Abram and asked him why he had not said Sarai was his wife. Pharaoh then sent Abram and Sarai away with all they had.
3. My third dream is even wilder. I have stolen my father's idols and my husband does not know. He has told my father to kill anyone he finds with them. Luckily for me I'm sitting on them and I will not get up. Who have I become?

Rachel had stolen her father's images when Jacob fled from Laban. Laban was unable to find the images which Rachel had put in the camel's furniture and sat on. Rachel told Laban that the custom of women had come upon her and she could not get up. As a result Laban did not find the images, and Jacob became angry and sent him away. (Genesis 31:19-36)
4. Just when I thought it couldn't get any wilder, I dreamed that I was being defiled by a man named Shechem. Well, at least he asked for my hand in marriage after the shameful act. Oh dear! There'll be no wedding bells. My brothers killed him. Who was I in my dream?

After Shechem defiled Dinah he asked to be allowed to make her his wife. Her brothers replied that they could not give their sister to an uncircumcised man, so they asked for all the men to be circumcised; then they could become one people. In this way they deceived Shechem, because on the third day when the men were sore Dinah's brothers went boldly to the city and killed all the men.

They took Dinah from Shechem's home and destroyed the city because their sister had been defiled. (Genesis 34)
5. Another dream? Unbelievable! Now I am at home tending to my chores when my sick son is brought to me by a lad. He is crying for his head and sits on my knees until he dies at noon. I send for Elisha, the man of God. Who am I in this dream?

II Kings 4 tells the story of the Shunammite woman. She had provided for Elisha whenever he came by, and as a result she miraculously conceived a son according to the word of Elisha. Her son went to the field with Elisha and became ill. Elisha sent a lad to take him home to his mother, and eventually he died on his mother's knees.

She placed him on Elisha's bed and went to fetch Elisha who came and prayed to the Lord. He then stretched on the child twice and he returned to life. (II Kings 4:8-37)
6. I know you won't believe me, but my wild dreams have now moved into the New Testament. My husband went to minister in the temple and came home dumb after seeing an angel who told him that I would become pregnant with a son who would turn people to the Lord their God. Who was I in my latest dream?

According to Luke 1, Zacharias went into the temple to burn incense. An angel of the Lord appeared before him and delivered the message that his wife would bear a son who would be the forerunner of the coming Messiah. Zacharias knew that his wife had passed the age of childbearing, and he was an old man, so he doubted the angel.

As a result of his unbelief he was struck dumb. Elizabeth bore John who is also known as John the Baptist. He did a mighty work in proclaiming the coming Messiah.
7. I want to wake up from this dream because it's making me look as if I'm really wicked. I told my daughter to ask for John the Baptist's head in a charger. Quick! Wake me up by naming the character I became in my dream.

Herod had John the Baptist arrested and placed in prison because of Herodias, his brother Philip's wife. When Herod's birthday was kept and the daughter of Herodias danced before him, Herod was so pleased that he told her he would grant her any request she made.

She had been advised by her mother to ask for the head of John the Baptist in a charger. When she made her request, he sent and had John beheaded in prison. His head was given to Herodias' daughter who subsequently handed it over to her mother. (Matthew 14:1-11) Quite gory.
8. I am weeping bitterly in this dream because my brother has been dead four days and Jesus did not come. Wait! He is here! I cry out 'Lord, if thou hadst been here my brother had not died.' Who am I now?

Lazarus, who Jesus loved, was sick, so his sisters sent a message to Jesus asking Him to come and restore His friend to health. After Jesus heard of Lazarus' illness, He remained where He was two more days before leaving for Judea. As a result, Lazarus was already dead for four days when he got there. Martha, hearing of His arrival, went to meet Him while Mary remained in the house.

The quoted words were said by Martha when she saw Jesus. Jesus, after assuring her that He was the resurrection and the life, called Lazarus back to life. (Read John 11:1-36.)
9. I'm weary. Really need to stop dreaming, but here comes another. My husband just fell dead at Peter's feet after lying about how much we sold a piece of land for. I told the same lie and now I'm dead too. Please say who I am so I can awaken from this horrid dream.

In Acts 5:1-11 it is recorded that Ananias and Sapphira sold a piece of land and kept back a part of the price. Ananias lied to Peter about it, and Peter told him that he had not lied to man but to the Holy Ghost. He immediately gave up the ghost. Not knowing what had happened to Ananias, Sapphira told the same lie and subsequently died. Great fear came upon the church as a result.
10. Believe it or not I'm at my last and wildest dream. In this dream I'm not even a woman. I'm on a lonely, barren island. It is the Lord's Day. Ah! There's the voice I heard from heaven...Listen: 'I am Alpha and Omega, the beginning and the end.' Who am I in this dream?

The apostle John was left on the isle of Patmos to die. He was in the Spirit on the Lord's day when he heard a great voice from heaven like a trumpet. The voice identified Himself as the Alpha and Omega, the beginning and the end. John was then told to write the things which he would see in a book and send it to the seven churches.

It is believed that the book of Revelation is the record of the things John saw while on the Isle of Patmos. (Revelation 1:10-11)
Source: Author Verne47 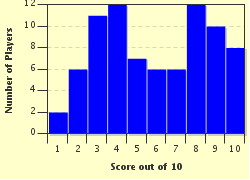