Located in Dubai, United Arab Emirates, the Burj Khalifa is an unbelievably tall building. Discover what this architectural creation is all about!

Share on Facebook
Share on Twitter
Share by E-Mail
Author
funnytrivianna
Time
4 mins
Type
Multiple Choice
Quiz #
325,116
Updated
Dec 23 22
# Qns
10
Difficulty
Tough
Avg Score
6 / 10
Plays
830
Awards
Top 20% Quiz
This quiz has 2 formats: you can play it as a or as shown below.
Scroll down to the bottom for the answer key.

Quiz Answer Key and Fun Facts
1. Standing at over 828 meters (2717 feet) when construction was completed, the Burj Khalifa broke more than one world record. Which of these is not one of those records?


Answer: Most gold and marble floor embellishments in the world

The Burj Khalifa does not have a record for the use of gold and marble in its floor embellishments. When the Burj Khalifa was constructed it broke many world records which may or may not be surpassed in the future. These titles included: tallest building, tallest free-standing structure, highest number of stories, highest occupied floor, highest outdoor observation deck, elevator with the longest travel distance and tallest service elevator.
2. Which organization established three criteria which determine whether or not a building is tall?

The CTBUH (Council on Tall Buildings and Urban Habitat), located in Chicago, established the three criteria which determine what classifies a building as tall. These three criteria include the height to the architectural top, the height of the highest occupied floor and the height to the very tip of the structure. Clearly, the CTBUH established that the Burj Khalifa met the requirements.
3. What determines the top of the height, to the tip, of a structure such as the Burj Khalifa?


Answer: Top of antennae, flagpoles, sign or other functioning technical piece of equipment

The measurement of height starts from the level of the lowest open-air pedestrian entrance and ends at the architectural top, including spires, signs, flagpoles, antennae and any additional technical equipment that is functional. The tip is literally the very top, no matter what that might be.

The Burj Khalifa's massive height of 828 meters (2717 feet) is measured all the way up to the tip of the structure.
4. Which letter of the alphabet does the Burj Khalifa get its floor plan shape from?

The Burj Khalifa's floor plan is a Y-shape so as to give a maximum view of the Arabian Gulf. These three elements are arranged to go around the central core of the structure. This design gives the structure a stable foundation along with twenty-six helical levels. The levels decrease in size, at different increments, as the structure continues to grow upward in height. The central core reaches the top and forms a sculpted spire.
5. Levels 111-121, levels 125-135 and levels 139-154, in the Burj Khalifa, are made up of which type of suites?

Skidmore, Owings & Merrill LLP was formed in Chicago in 1936 by Louis Skidmore and Nathaniel Owings. In 1939 John O. Merrill joined the firm. SOM, for short, is one of the leading architectural firms. Adrian Smith's position, in the construction of Burj Khalifa, was chief architect and Bill Baker was the chief structural engineer. Some of the structures that this firm has built include the John Hancock Center and the Sears Tower.

Award-winning designer Nada Andric led the company of Skidmore, Owings & Merrill LLP in the interior design of the Burj Khalifa. The primary contractor was Samsung C&T of South Korea. Some of the major subcontractors included Besix of Belgium and also Arabtec from the UAE (United Arab Emirates). The project manager assigned to the enormous job was the Turner Construction Company of the U.S.A. The developer of this beautiful building was Emaar Properties, headquartered in Dubai.
7. The Burj Khalifa was named after United Arab Emirates' President Khalifa bin Zayed Al Nahyan. What was the building's original name?

Prior to the inauguration of Burj Khalifa, it was known as Burj Dubai when the project began in 2004. On January 4, 2010 Burj Dubai was inaugurated and surprisingly was renamed after His Highness Sheikh Khalifa bin Zayed Al Nahyan, President of the UAE.
8. For which reason is the Burj Khalifa planning to use solar energy?


Answer: To keep up with the demand for hot water

140,000 liters of water are used daily in the Burj Khalifa. Keeping up with the demand for water has pushed the need of solar panels for the purpose of heating the water. The energy that will be saved by the use of solar panels is equal to 690 megawatts per year.
9. What is on the outside of Burj Khalifa that cost approximately 217 million dollars US?

WET Design constructed the Dubai Fountain at a cost of 217 million US dollars. This California-based company built the fountains at the Bellagio Hotel in Las Vegas. The Dubai Fountain has 6,600 lights to illuminate it as well as 50 colored projectors for the production of water ballets set to music. The fountain is 275 meters (902 feet) long and can shoot water as high as 150 meters (490 feet). A naming contest was held and as a result the announcement to name the fountain Dubai Fountain was made on October 26, 2008.
10. Which event happened on February 10, 2010 at the Burj Khalifa?


Answer: People were trapped in an elevator

A group of visitors were trapped on the 124th floor in an elevator. The elevator, which became stuck around 6:20 pm, had fifteen people inside. Michael Times, one of the trapped victims, said "It almost sounded like a small explosion. It was a really loud bang." (source: nydailynews.)

After about 45 minutes, rescue crews arrived and had to use ladders to assist people up out of the elevator shaft.

To transport people back to the ground, a freight elevator was used.
Source: Author funnytrivianna

This quiz was reviewed by FunTrivia editor LadyCaitriona before going online.
Any errors found in FunTrivia content are routinely corrected through our feedback system.
Most Recent Scores
Dec 30 2022 : Guest 42: 3/10
Dec 15 2022 : Grosshaus93: 4/10 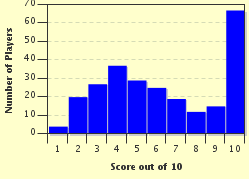 
Other Destinations
Explore Other Quizzes by funnytrivianna