When it was set up the United Kingdom's National Health Service was a world leader in providing free health care to all, regardless of position or wealth. How much do you know of its history. In this quiz the shortened, common, term of NHS will be used.

Quiz Answer Key and Fun Facts
1. The National Health Service came into being on July 5th 1948. Which city was home to the first NHS hospital?

Park Hospital in Trafford, Manchester, was the place chosen to launch the new National Health Service and so is regarded as the first NHS hospital. The 'first' patient was a teenaged girl suffering from a liver complaint, from which she survived. The girl was the first patient the Secretary of State for Health spoke to on his visit to the hospital on the day the NHS was launched.
2. Who was the man responsible for the setting up of the NHS?

Aneurin 'Nye' Bevan was the youngest Minister in Britain's first government after World War II. The NHS was one of the major parts of the governments promise of social reform following the war. Despite opposition from both the Conservative party and a large proportion of the medical profession, Bevan finally managed to persuade all sides to accept the new Health Service.
Cripps was the Chancellor of The Exchequer, Ernest Bevin was, at the time, Foreign Secretary and Atlee was the Prime minister.
3. When the NHS was originally introduced, it was partly funded by every working person through their National Insurance payments.

This is a common misconception. The NHS was, from the outset, funded by central government via direct taxation,ie income tax. National Insurance is a payment that funds several social security benefits including the State Pension.
4. In which year were NHS prescription charges introduced?

From the day of its foundation, all medicines prescribed on the NHS were provided free of charge. This proved to be a massive burden on the finances. The levy was first put forward by Atlee's Labour government and led several ministers, including Bevan and Harold Wilson, to resign.

The charges were introduced in 1952 by the new Conservative government and set at 1 shilling (5 pence) per prescription form. This was changed in 1956 to 1 shilling per item. By 1959 this had doubled to 2 shillings (10 pence) per item.

The Labour government of Harold Wilson abolished the charges in 1965, but re-introduced them in 1968 at a higher rate of 2 shillings and 6 pence (12 and a half pence), but they also introduced a list of exemptions. In April 2008 the cost of a prescription, for those who have to pay, stood at 7 pounds and 10 pence per item.
5. In 1962 a particular operation was performed in an NHS hospital for the first time. It was carried out to replace which part of the body.

The operation, the first full hip replacement, was carried out by Professor Sir John Charnley at the Wrightington Hospital in Wigan, Lancashire. So that he could study the wear and tear of the replacement hips, Professor Charnley asked his patients if they would mind donating them back after they had died. Amazingly, 99% of the recipients agreed to the request.
6. The NHS is not just about making ill people better. It also helps people where corrective or invasive measures are not required. In 1978 one such procedure produced a particular result. Which treatment was it?

Although fertility treatment had been in use for some years, it was in 1978 that IVF (in vitro fertilisation) produced a result in the birth of Louise Brown. The treatment was carried out by Doctor Patrick Steptoe at Oldham General Hospital, Greater Manchester. Louise had a younger sister, Natalie, who was also conceived by IVF four years later. In 1999 Natalie became the first IVF baby to conceive naturally.
Cancer screening was introduced on a national level in 1988, CT scans were first used in 1972 and the first UK MRI scan took place in 1980.
7. In 1953 Watson and Crick published their results into the structure of DNA, a discovery that was to have far reaching consequences for the NHS. In which year were they awarded the Nobel Prize for Medicine?

Francis Crick originally studied physics and worked for the Admiralty in World War II on the development of mines. He switched to biology in 1947 and began working at Cambridge University. In 1951 he was joined by an American, James Watson, and the two began to work together.

At the same time, at Kings College, London, Maurice Wilkins and Rosalind Franklin were studying DNA using X-ray diffraction. Crick and Watson used their findings in their own work. In 1962 Watson, Crick and Wilkins shared the Nobel prize. Franklin had passed away in 1958 and the prize is not awarded posthumously.
8. In the early 1990's the NHS in England and Wales underwent a radical change in its organisation. What system was introduced?

In 1990 the NHS and Community Care Act 1990 introduced several reforms into the Health Service. One of these reforms was the concept of individual budgets which opened the door for the formation of NHS Trusts. They are not trusts in the legal sense of the word, rather they are a way of decentralising health care and putting control for local services into the hands of local health care providers.
9. In the last few years of the 20th Century several initiatives were introduced into the NHS to make some services easier for the public to access. Which of the following was not one of the changes made in those years?

Patient choice was introduced in 2004 and, for the first time, gave patients the opportunity to decide where they received treatment, instead of having to go to the hospital that they are told to go to. NHS Direct is a system where patients can telephone a call center staffed by nurses and get general health advice on a wide ranging variety of topics.

There is also an on line version. The walk in centers tend to be in the larger cities and are exactly what the name implies. You can just 'walk in' and talk to a health care professional and get advice.

The National Donor Register was set up in 1994 to collate all the information about who was prepared to donate what in the event of their death.
10. Within the NHS, what was the meaning of PCT?

A Primary Care Trust (PCT) was the organisation, within the NHS, that delivers local services. PCTs were part of the larger Strategic Health Authorities and depend on them, partly, for budgeting. The PCT delivered local general practitioner, community hospital, mental health and dental care.
Source: Author romeomikegolf 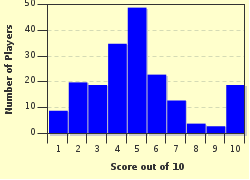 
Other Destinations
Explore Other Quizzes by romeomikegolf