Here's a chance to test your knowledge of celebrity 'reel' names. Good Luck

Quiz Answer Key and Fun Facts
1. What big box-office draw spent a year at a Franciscan seminary hoping to become a priest and later dropped his 'real' surname, Mapother, when he became an actor?

Tom Cruise was born Thomas Cruise Mapother IV in Syracuse, New York. Cruise enrolled in the seminary but says he later quit because he realized he liked women too much to give them up.
2. You know her as a famous TV doc, but her childhood friends know her as Joyce Penelope Frankenberg. Who is she?

Long before she became Dr. Quinn, Medicine Woman, Jane Seymour was known as Joyce Penelope Frankenberg in her hometown of Hillingdon, England.
3. Whose real first name is Coy?

Coy Luther Perry III was born on October 11, 1965, in Mansfield, Ohio. After seeing Paul Newman in Cool Hand Luke at the age of five, Perry decided to to call himself Luke.
4. Her last name is real, but she changed her first name from Alicia after her first big break in show biz--baring her buns. She is _____ ?

Jodie Foster was born Alicia Christian Foster in Los Angeles on November 19, 1962. At age three, she was chosen to appear in a now-famous Coppertone ad showing her untanned bare bottom.
5. What TV hunk was called David Guez by his classmates at University High School in West Los Angeles?

"Baywatch" actor David Charvet was actually born David Guez (he uses his mother's maiden name for his stage name). "Melrose Place" fans now know him as the conniving Craig Field.
6. What comedian-turned-actor had to change his last name because it already belonged to someone famous?

Winona Ryder was born Winona Laura Horowitz in Winona, Minnesota. She told Rolling Stone magazine that the inspiration to change her name came from a Mitch Ryder album. Mitch's real name, by the way, is William S. Levise Jr.
8. Friends had to literally push Alan Stewart Konigsberg onstage, because he suffered from severe stage fright while doing stand-up comedy. Who is this scaredy-cat?

Woody Allen was born Alan Stewart Konigsberg on December 1, 1935, in Brooklyn, New York. He began using the alias Woody Allen at 15, when he took a job writing for a gossip columnist. Actress Shirley MacLaine discovered Woody and helped him get his first movie role.
9. Which of these stars doesn't use her real name?

Anne Bancroft was born Anna Marie Italiano in the Bronx. She chose her stage name from a studio list.
11. William Bailey is better known as which rocker?

Axl Rose named himself Axl after a band he was involved with early on. He took the name Rose after finding out he was adopted and that Rose was his birth name.
12. Which famous director's real first name is Shelton?

Spike Lee was born Shelton Lee Jackson on March 20, 1957, in Atlanta.
13. Beautiful people don't always have beautiful names. Which model-actress used to go by the name of Eleanor Gow?

Elle Macpherson was born Eleanor Gow on March 29, 1965, in Sydney, Australia.
14. Woody Allen's ex-lover and leading lady, Diane Keaton, uses a stage name. Part of her real name is the same as one of Woody's movie titles. Which film is it?

Diane Keaton was born Diane Hall in 1946 in Los Angeles. She eventually adopted her mother's maiden name, Keaton, to avoid confusion with another actress named Diane Hall. Ironically, Diane Keaton won an Oscar in 1978 for best actress in the film Annie Hall.
15. Which sexy actress who has appeared on Melrose Place was born with the unsexy name of Nora Louise Kuzma? 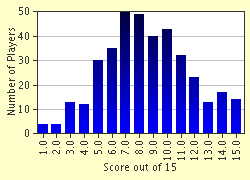 Related Quizzes
1. What's In A Name? Average
2. Celebrity Nicknames Easier
3. Androgynous Celebrity Names Easier
4. AKA - Who Am I? Average
5. Gender Bending Pop Culture Names Average
6. Who's In A name? Part 1 Difficult
7. What's My Name? *3 Average
8. What's in a Name? Average
9. Celebrity Real Names 2 Average
10. Who, When and Where? Average
11. My Old Name, and My New Name! Tough
12. Silent Silver Screen Sobriquets Easier


Other Destinations
Explore Other Quizzes by racemany2k