Off the Wall About Harry Potter #6 Quiz

Sixth in my "Off the Wall About Harry Potter" series, this quiz is all about book six, 'Half Blood Prince'. Good luck!

Share on Facebook
Share on Twitter
Share by E-Mail
Author
lil_miss_kaina
Time
6 mins
Type
Multiple Choice
Quiz #
222,148
Updated
Dec 03 21
# Qns
15
Difficulty
Average
Avg Score
11 / 15
Plays
7966
This quiz has 2 formats: you can play it as a or as shown below.
Scroll down to the bottom for the answer key.

Quiz Answer Key and Fun Facts
1. After Sirius dies, Buckbeak goes back to live with Hagrid. However, if the Ministry finds out, he'll be executed. In order to help protect him, Dumbledore gives Buckbeak a new name. What is it?

Though Harry was the official owner of Buckbeak...I mean Witherwings...after Sirius died, he knew it would make both Hagrid and Buckbeak happy to have Witherwings at Hogwarts.
2. Dumbledore told Hermione that people find it far easier to forgive others for being wrong than for being right. Who was he referring to when he told her this?

Dumbledore was referring to Percy. Even though Percy now knows that his family was right in believing that Lord Voldemort was back, he still refuses to "be a part of" his family.
3. Harry, Hermione, and Ron receive their OWL results over the summer. Hermione scores top grades ("O" for Outstanding) in all of her classes but one. Which class does she score an "E" in?

Though she doesn't get an "O" in her DADA class, she does manage to "scrape by" with an "E"! (Exceeds Expectations) She scored an "O" in both Herbology and Potions. Had Hermione still be in Divination, I suspect she may have gotten a less than satisfactory grade!
4. While in Diagon Alley to pick up their school supplies, the trio see large Ministry of Magic posters pasted over many shop windows. What color are these posters?

Though these posters are over many of the closed shops' windows, they most definitely are not on any windows at Weasley's Wizard Wheezes. The twin's decide to put up their own posters instead. Who can forget those posters advertising "You-No-Poo"?!?
5. As more and more people begin to disappear or are killed by Voldemort and his followers, Hogwarts students start becoming directly affected. While in Herbology, who is called out of class only to be told that their mother has been found dead?

Susan Bones has also been directly affected, however, she wasn't pulled out of Herbology to be given the news. We know that Susan's aunt, Amelia Bones, was killed over the summer after Voldemort's return, and her uncle Edgar (Amelia's brother) and his wife and children were killed before Voldemort's fall.
6. When we get out first clue as to Harry's feelings for Ginny, Harry is in his first Potions class of the year. What is the name of the love potion that reminds Harry (though only subconsciously) of Ginny?

Professor Slughorn brewed up Amortentia for his Potions class. It is a love potion that smells differently to everyone, as it is meant to smell like things that attract you. Harry smells, among other things, "something flowery he thought he might have smelled at the Burrow." After class, Ginny walks up and he smells that same smell on her.
7. Molly Weasley is constantly fretting over all of the children, worried that at any moment they might die. After finding her fretting again, who says to her, "I like the quiet life, you know me"?

While in Apparition lessons, Susan Bones of Hufflepuff splinched herself by losing a leg...though this was quickly repaired by Hogwarts staff! During their Apparition test, Hermione passed with flying colors (ooh, shocking!) while Ron failed because he has splinched himself by leaving half of an eyebrow behind.
9. Though he hates his new master, Kreacher does give Harry a Christmas present with a card reading "To Master from Kreacher". Inside, Harry finds a box of maggots. True or False?

Though he doesn't give very good Christmas presents, Harry finds that owning Kreacher can be quite useful. He uses Kreacher (and the devoted Dobby) to tail Malfoy, hoping to find out where Malfoy goes when he isn't showing up on the Marauder's Map. The house elves report back to Harry, informing him that Malfoy frequents the room on the seventh floor, known as the Room of Requirement.
10. While in Potions, Harry finds that following the Half Blood Prince's handwritten instructions gets him better marks than following the instructions in the book. What is the name of the book the Half Blood Prince has written in?

'Magical Drafts and Potions' is Harry's Potions book during his first year, 'Moste Potente Potions' is the book from the restricted section that contains the instructions on making Polyjuice Potions, and 'Asiatic Anti Venoms' is a book Harry consults during his fifth year while working on Potions homework.
11. As part of the new Ministry-approved security measures, Arthur Weasley has Molly ask him a question only he would know the answer to, before letting him into their house. She asks him what his dearest ambition is. What is Arthur's reply?


Answer: To find out how airplanes stay up

Arthur has always been obsessed with anything Muggle. He collects both batteries and plugs, and has a habit of taking muggle objects apart and bewitching them, which is precisely what he paid to prevent at his job with the Ministry.
12. After moving from France to help improve her English, Fleur Delacour becomes engaged to Bill Weasley. She is staying at the Burrow over the summer, much to Mrs. Weasley, Ginny, and Hermione's displeasure. True or False: Ginny began calling Fleur "Phlegm".

Mrs. Weasley is very upset that Fleur is to become part of the Weasley family. She makes very obvious comments about how Bill would be much better off with someone like Tonks. Unfortunately for Mrs. Weasley, Tonks has fallen in love with Remus Lupin. In the end, however, Mrs. Weasley realizes that Fleur does in fact love Bill, and welcomes her with open arms, literally!
13. When at the Dursley's picking up Harry, Dumbledore summons Kreacher. What does Harry say to Kreacher that confirms he is now Kreacher's master?

Sirius' will dictated that Harry was to receive everything he owned, including Kreacher and Number Twelve Grimmauld Place. However, Dumbledore wanted to be sure that Mrs. Black hadn't put a spell on the house to ensure that it, and all of its belongings, were only passed on to a member of the Black family. Luckily for the Order, she hadn't.
14. " 'BLANK'...are many, varied, ever changing, and eternal. Fighting them is like fighting a many-headed monster, which, each time a neck is severed, sprouts a head even fiercer and cleverer than before. You are fighting that which is unfixed, mutating, and indestructible." Snape said this to his new Defense Against the Dark Arts class. To what or whom was he referring to? (Fill in the 'BLANK')

This little speech angers Harry, as it sounds to him like Snape is impressed and in awe of the Dark Arts. We know that at a time in his life, Snape was impressed with the Dark Arts as he was a Death eater. Only time (and the seventh book) will tell if he's truly given up his dark ways.
15. "I got it out of your vault for you, Harry, because it's taking about five hours for the public to get to their gold at the moment, the goblins have tightened security so much. Two days ago Arkie Philpott had a Probity Probe stuck up his...Well, trust me, this way's easier." Who said this to Harry?

By working for Gringotts, Bill was able to get Harry's gold without too much hassle. Unfortunately, the only mention of Charlie in this book is that he's still in Romania.

Thanks for taking my quiz, hope you enjoyed it!
Source: Author lil_miss_kaina 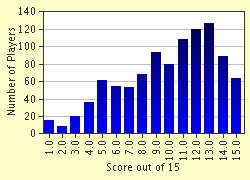 
Other Destinations
Explore Other Quizzes by lil_miss_kaina